Amarinder asks Health Dept. to step up indigenous production of medical oxygen: With Covid cases and fatality in the state rising, Punjab Chief Minister Captain Amarinder Singh on Monday directed the Health Department to step up indigenous manufacturing of medical Oxygen to supplement the current supplies in order to ensure that there is no shortage of this critical commodity to tackle any future crisis. 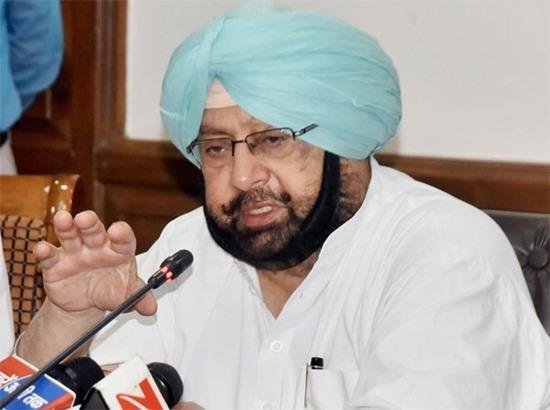 The state, which has been procuring all its medical Oxygen from neighbouring areas, has now decided to also go in for internal manufacturing to meet any shortfall that could arise  with   Covid cases spiking in the state. Till now, Punjab was procuring all its medical Oxygen supplies from other states, including Uttarakhand, Himachal Pradesh and Haryana. However, as cases continue to spike, and amid reports of Oxygen shortages in several parts of the country, the Chief Minister stressed the need to generate additional supplies through internal manufacturing also.

In line with this decision, the Health Department has so far issued license to one industrial Oxygen supplier in Punjab to manufacture Medical Oxygen, while six packaging units have been allowed to package Oxygen for medical use. With this, the state now has internal capacity to manufacture 800 medical Oxygen cylinders and packaging of 2000 units per day, and the government hopes that with the supplies already being procured from other states, this would help cope with any further escalation in demand in the coming weeks.

The state government has also appointed a Nodal Officer to monitor the supply and demand of Medical Oxygen amid spiralling cases of Covid, and the Chief Minister has asked the Health Department to ensure that indigenous production and packaging is further scaled up to meet any eventuality.

During a virtual meeting to assess the situation arising out of the pandemic, Captain Amarinder directed the Department to ensure that there is no shortage of Oxygen for treatment of Covid patients in the state.

The Chief Minister was informed that the state currently had adequate supplies of Oxygen to meet the demand triggered by an increasing number of Covid cases. He was further told that of the 6653 Covid patients admitted at the Government Medical Colleges (GMCs) in the state, 5269 had recovered and been discharged, with 550 still under treatment.

Chief Secretary Vini Mahajan apprised the meeting that Punjab is following the 10-day discharge policy as per ICMR guidelines. Any positive patient admitted to Level 1 can be discharged on the 10th day, if the patient has remained asymptomatic for the last 3 days of admission. Further, to manage the increasing number of cases, it has been decided to add 50 L3 beds in Faridkot Medical College, she said.

A special invitee to the meeting, Ambuj Roy, Professor of Cardiology, AIIMS, who has been studying the mortality figures in Punjab, said the possibility of mutation of the virus was being studied. Dr KK Talwar, head of the Group of Experts on Health for the Punjab government, said the panel would be sending samples to IMTECH to check on the nature of the virus and ascertain if it has mutated in the last one month, in comparison with the samples sent earlier.

The main cause of Punjab’s high CFR was co-morbidity, Roy said, suggesting that all those with >1 co-morbidity should be admitted in hospitals/facilities, with aggressive monitoring to pick up hypoxia early. Availability of Oxygen, early institution of steroid therapy including pulse steroids, and early institution of anticoagulants were among the treatment suggestions made by Roy, who was involved in Punjab’s first Covid fatality audit. He also advised ensuring availability of biomarkers and strengthening of the imaging facility for picking up severe cases to reduce mortality.

To a query from the Chief Minister on the success of plasma therapy, Dr Talwar said studies did not show any confirmed results so far though FDA had recommended this course of treatment. However, given that there was no evidence of any negative impact either, it was advisable to give plasma therapy to moderate and moderately serious patients, said Dr Talwar. So far, 39 recovered patients had donated plasma, leading to the collection of 77 units. At the GMCs, 24 patients have been given plasma therapy so far, four in government hospitals and 33 in private institutions.

Health Secretary Hussan Lal, in his presentation, apprised the Chief Minister of the various measures taken to boost testing and monitor home isolation cases, with the Health Department in the process of engaging a professional agency to monitor these cases.

The 104 Medical helpline is monitoring Home Isolation cases regularly, especially those above 40 years of age, to assess their parameters on a daily basis. Over 2500 calls have been made in the last 4 days to Home Isolation cases, the meeting was informed.

To boost testing, various steps have been taken to streamline walk-in testing, with sufficient teams and counters being put in place across districts to minimize waiting time and make the entire process smooth for people. Walk-in testing (Rapid Antigen and RT-PCR testing as the case may be) is being made available between 9:00 am-4:00 pm on all days, except Sunday, when emergency testing will be available, the meeting was informed. Emergency testing is also being done outside the 9:00 am-4:00 pm window.

JioNews: The best place to get the latest and most relevant...

Rahul pays tributes to Nehru on his death anniversary