NewZNew (Chandigarh) : Back in the year 2010, there came a comedy film which picked up well with the word of mouth publicity, it made a good box office collection. Now 6 years later, the film’s sequel is ready to give the audience another big laugh with its unique plot and interesting cast. On Tuesday, the cast of ‘Tere Bin Laden – Dead or Alive?’ was in town for promotion. The film is slated to be released on 26th February and the industry and the audience have high hopes from this flick. 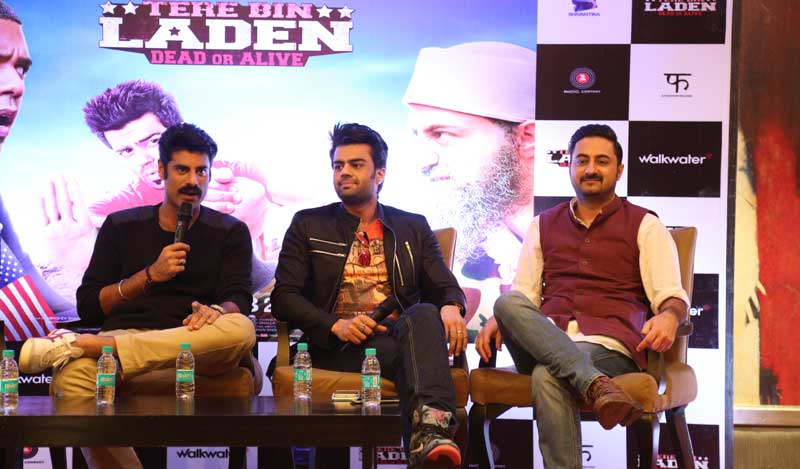 Known best for his anchoring skills, Manish Paul is quite excited about this new flick and believes it will altogether give a new direction to his acting career. He said, “Tere Bin Laden is a hit franchise and it is advantageous for me to be a part of it. It is a crazy film and will make you laugh every second. The timing and the writing of the script is outstanding. Hats off to our director Abhishek who has once again done a fantastic job.”

Actor Pradhuman Singh was playing the not-so-real Osama Bin Laden. He said, “When I was offered the sequel, I got quite excited as I knew that once again we are going to have much fun while shooting the film. This film has got new dimensions to fiction in a much lighter way which I liked very much.”

Actor SikanderKher seems to be the most entertaining according to the promo of the film. He told, “I am playing the character of David Chadhha who is certainly going to entertain you, all credit to our director. I am thankful to the team for being chosen for this role.” Writter and Director of the film Abhishek Sharma said, “We are bringing in a new entertainment format for our viewers. I am sure the audience will love it.”