NewZNew (Chandigarh) : Let’s break the walls from the minds of the people and bring man closer to man. Walls whether erected in the name of religion, caste, creed, language or culture have never raised the status of man. Humans must, therefore, adopt the path of love, compassion, cooperation, tolerance and peace.

Sh. Mohinder Singh Ji, Sanyojak Chandigarh Branch, said that the, Nirankari Baba Hardev Singh Ji Maharaj while addressing the first day’s open session of the 49th Annual Nirankari Sant Samagam of Navi Mumbai Maharashtra in the vast CIDCO Ground in Kharghar. The 3-day Samagam is being attended by lakhs of devotees of the Sant Nirankari Mission from all over Maharashtra and various other parts of the country and abroad. 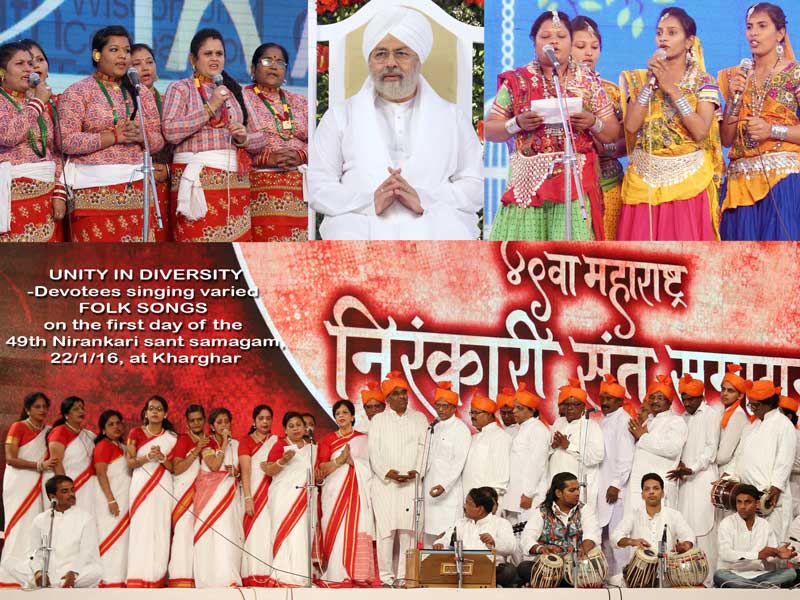 His Holiness said that saints, Gurus and prophets always taught man the lesson of love, brotherhood and cooperation. They endeavoured to unite man with truth and inspired them to rise above factors that sought to divide humanity. They preached that every human body has the same five basic elements and the same soul, the particle of God. Man should recognize the same and should not distance from man due to religion, caste, creed or culture.

Baba Ji, however, pointed out that man did not appreciate and follow what the saints and sages ordained.  They rather opposed them and committed atrocities.  He quoted the example of Lord Christ.  People did not understand the Truth he preached. They treated as truth what was never the truth. That is why they opposed him, tortured him. But Baba Ji said that saints and sages always moved forward on the path of truth, love and peace like water-streams never care for rocks but continue to flow towards the ocean, quenching everybody’s thirst and irrigating crops on the way, he said.

Baba Hardev Singh Ji Maharaj said that bricks have no religion of their own but they become Hindus when used to build a temple and Muslim when they build a mosque.  We use the same bricks to construct our houses. And the same bricks are used to build walls that divide humanity.  We must, however break these walls.  They have never raised the status of man. A human being has always attained heights through love, compassion, cooperation and tolerance.  The world measures status on the basis of worldly wealth and the achievement. But this is not the outlook of the saints and sages. They always improve life through the divine light of the Truth.

Baba Ji said that every speaker at the Samagam talked about the world without walls and bridging humanity peacefully.  The Samagam is, in fact, presenting a beautiful example as here people are together in spite of their diversities of religion, caste and culture. They live in the light of divine knowledge and seek to spread the same in the world. This is indeed what the world needs today.  Hence he exhorted everybody to take this message, this light further and further.

Today, the Samagam began with the colourful Sewadal Rally in which thousands of Nirankari Sewadal volunteers – men, women and children participated. Besides some items of P.T. Parade and games, they presented an impressive cultural programme based on the Mission’s message of love, unity, breaking walls and building bridges. The Sewadal Band remained a highlight by itself.

Blessing the rally, Nirankari Baba Hardev Singh Ji Maharaj said that while elsewhere any service to community is guided by selfishness, the volunteers of the Sewadal here offer their services selflessly and become an example for others. And this is the most important aspect of Sewa, he said.

Baba Ji said that the Sant Nirankari Sewadal is not only expanding with the expansion of the Mission and renderinh their services at local level, but they are always ready to serve the Mission in big Samagams. Moreover they are ready to serve the country and the humanity as a whole. Baba Ji mentioned about blood donation camps, tree plantation and cleanliness drives and the relief and rehabilitation measures during the natural calamities. Baba Ji said that the plantation of one lakh trees in Delhi and then one lakh trees in Mumbai recently as also the cleanliness drive being carried out at various railway stations has impressed one and all about the selfless service and dedication of the Sewadal volunteers and other devotees of the Mission.

Baba Ji exhorted the volunteers to continue to serve the Mission and the nation with the same spirit of discipline and dedication.  He said that it requires a lot of sacrifice to find the time for such selfless service to humanity along with fulfilling the domestic and social responsibilities.

On his arrival Baba Ji stood in an open vehicle and inspected the Sewadal rally and blessed the participants.  He also unfirled the flag of peace.

Speaking on the occasion Shri V.D.Nagpal, General Secretary of the Sant Nirankari Mandal and Member Incharge, Sewadal from Delhi said that the Mission today is teaching the lesson of love and respect and Sewadal is also following the same. He sought blessings from His Holiness so that every member of the Sewadal is able to serve the Mission with the same spirit.