Navratilova popped the question to Julia Lemigova in the Tennis Channel suite Saturday, drawing a loud cheer from the crowd.

“I was very nervous,” Navratilova said later. “It came off. She said yes. It was kind of an out-of-body experience. You’ve seen people propose at sporting events before, in movies, in real life. Here it was happening to me. It was like I was watching myself do it.”

The 57-year-old Navratilova won 18 Grand Slam singles titles, a mark she shares with Chris Evert. Serena Williams will try to match it in Sunday’s women’s final.

Navratilova said somebody suggested she propose during a changeover in the first match between Kei Nishikori and Novak Djokovic, but she didn’t want to disturb the players in any way. The only problem was that Navratilova was later scheduled to play a “Champions” doubles match with Jana Novotna against Tracy Austin and Gigi Fernandez. She tried unsuccessfully to get the start postponed without telling anybody why, so she was fretting that the Nishikori-Djokovic match would go five sets. Fortunately, it ended in four.

After the triumph in her personal life, Navratilova was also victorious in doubles.

When Navratilova walked into the locker room to get ready for the match, Austin didn’t know anything about what had just happened. The two chatted for a few minutes before Navratilova mentioned the proposal in passing.

Austin then made her re-enact the whole thing.

Navratilova said she and Lemigova would prefer to get married in Florida, where they live. A federal judge ruled last month that the state’s ban on gay marriage is unconstitutional, but Florida officials are appealing.

Navratilova reminisced about her 1981 U.S. Open finals loss to Austin, when the fans gave her a long ovation as the runner-up, as the first time she felt accepted as a newly minted American citizen and a gay woman. Thirty-three years later, gay couples can marry in 19 states and the District of Columbia, and Navratilova’s proposal got another big cheer from the U.S. Open crowd. 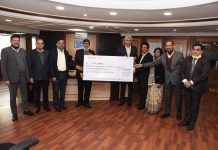 Elante out to make ‘singles’ feel special this Valentine

Steelbird all set to roll out new BIS Standard Helmets