NewZNew (S A S Nagar) : “Among aged, prostrate is a general problem whereas disorders of urogenital system are particular. The males above 50-year are generally face prostate enlargement problem . The most common symptoms of prostrate problem are frequent urination, slow urinary flow, feeling of incomplete evacuation, urgency and occasionally incontinence.” 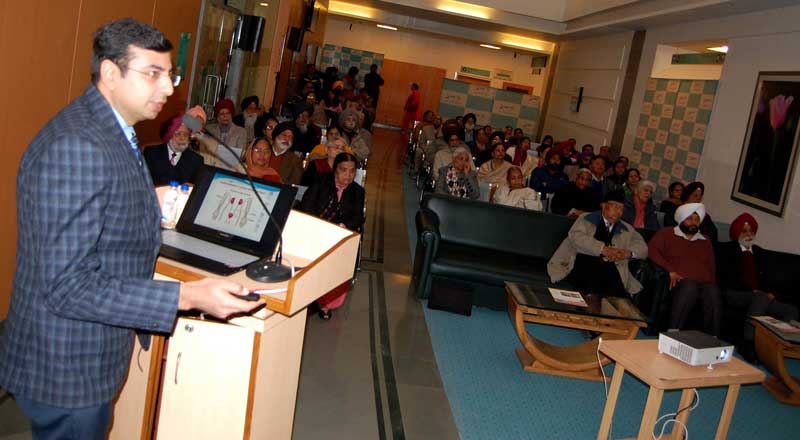 This was stated by Dr Manish Ahuja, Sr consultant, Urology while addressing around 110 senior citizens at a seminar on ‘Urologic problems in aged’ at held at Max Super Specialty Hospital Mohali today.

Dr Ahuja explained further that most men will have benign or non-cancerous enlargement of prostate. But some may develop prostate cancer also. These problems can be managed and treated well if they can be detected at early stages. Thus it is important to know the possible symptoms and screening tests available for early diagnosis of these medical conditions.

Men also tend to suffer from erectile dysfunction or impotence as they grow aged. This again can be managed with medications at early stages. However, management of this condition becomes challenging with aging mainly because this is complicated by many associated heart and other chronic ailments, informed Dr Ahuja.

Talking about urological problems in women, Dr Ahuja said that most women after menopause tend to develop urinary symptoms. Many have recurrent urinary infections that need proper treatment and preventive care.  Sexual dysfunction is another common problem seen in older women which is mainly attributed to hormonal changes. Also pelvic organ prolapse and involuntary leakage of urine is a troublesome condition seen in this age group.

Informing on preventive measures, Dr Ahuja said that measures can be taken to delay these problems and in some cases prevent them from onset altogether. Maintaining an active lifestyle helps and following an exercise regimen along with a balanced diet with antioxidant supplements also prevents several diseases associated with old age.