NewZNew (Chandigarh) : For this 17 year old boy from Kotkapura, it was more than a miracle when after having been immobile for eight months he started moving his limbs within 24 hours of his surgery at Fortis Hospital, Mohali. After three and a half months of surgery conducted by Dr. Deepak Joshi, Spine Surgeon, he is now leading a normal life.

Interacting with media persons here today, Dr. Joshi explained when Inderpreet came to Fortis, a medical examination was conducted, which brought out that the main cause of the misery was irreducible dislocation of C1 over C2 with severely pinched Spinal Cord.

The doctor said the ordeal started when the boy was operated upon at a private hospital (before he came to Fortis hospital) for trauma at the top of spine where C1 vertebra was dislocated over C2. Though there was temporary improvement, gradually the problem aggravated and the patient got fully dependent on his parents for feeds, toileting and was confined to bed and wheel chair. At that stage there was no alternative so physiotherapy was advised. 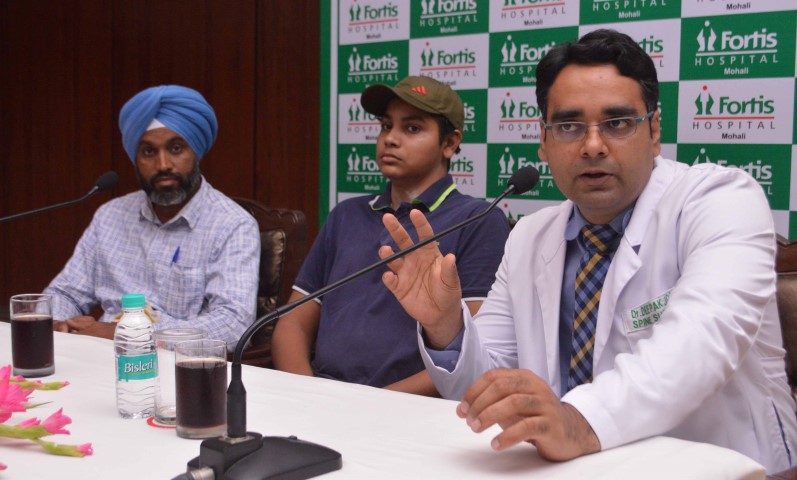 After six months of undergoing physiotherapy, there were no signs of improvement. “We travelled to various centers in Punjab and other states for treatment but no satisfactory response was given to them regarding treatment and outcome,” said Mr Gursevak Singh, the teeanger’s father.

“As the C1 vertebra was dislocated over C2 and was fixed in that position for 8 months, it was a challenge to move the vertebra and to reduce it without injuring the already compromised cord,” explained Dr. Joshi.

The complex surgery was successfully performed at Fortis Hospital on March 1. This surgery, he said, was difficult to do as compared to a normal surgery, because it was a re-do surgery, the normal anatomical land marks were lost as the bones of the vertebra were already destroyed by previous surgery. However, after undoing the changes of previous surgery, the dislocated and immobile vertebras were reduced and fixed with screws and rods, with help of a special technique and the spinal cord was totally freed.

Within a month the boy made gradual progress at home, and was able to walk and eat without anyone’s help.

After three months of surgery, Inderpreet of is perfectly fine now, and he is leading a normal life. The boy is going to fields with his father and is planning to start playing badminton very soon.