7-Month-Old Infected Open Fracture Cured At Fortis:  20-year-old, Amritpal who was suffering from an open fracture of the leg (tibia) around 10 months ago was unable to walk. 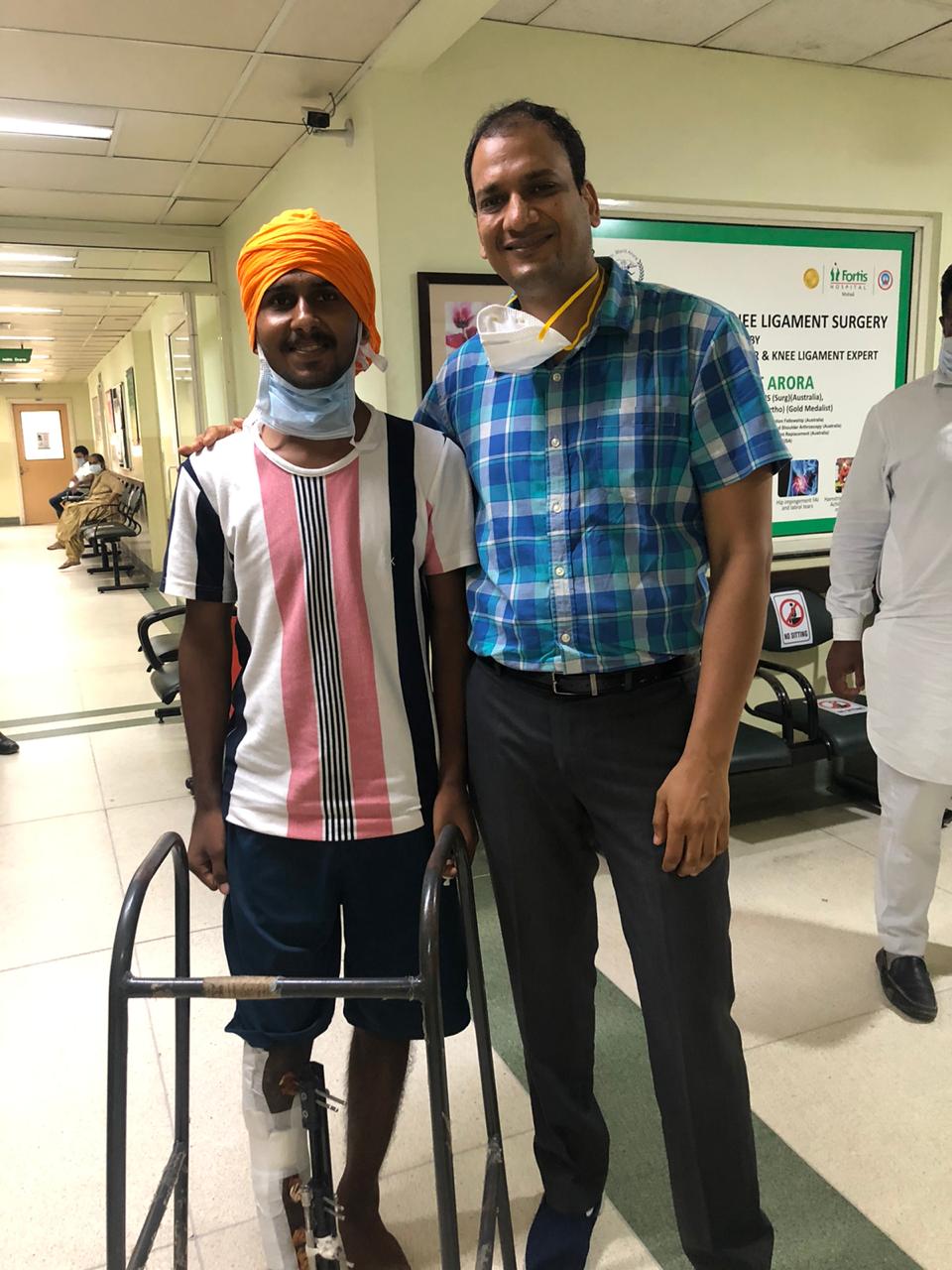 After timely and effective treatment received at Fortis Hospital Mohali, he is now able to walk with the help of a walker.

Dr. Sandeep Gupta, Senior Consultant, Bone and Joint, Fortis Hospital, Mohali, who treated the patient, informed, “Due to the previous open injury and probable subclinical infection, hiding inside the bone, the plate was infected leading to a persistent wound draining pus from the leg. The patient was in severe pain and unable to walk.”

He further added, “The patient tried medical management in the form of antibiotics and superficial wound cleaning which did not address the problem. He also visited other hospitals, but in vain. Finally, seven months later, the patient came to Fortis Hospital, Mohali with a broken plate, discharging sinus, and wheelchair-bound. The patient’s problem was addressed in a staged manner as per the novel improvised rail-plate technique.”

The first stage plan was to do a thorough wound cleaning, which required meticulous removal of dead and infected bone inside, along with a broken plate. This resulted in a bone gap of 10 cm, which was filled temporarily with an antibiotic mixed bone cement block and stabilization of bone with a fixator. The patient could mobilize with a walker the next day. Subsequently, on a follow-up, the patient’s wounds gradually healed and he got rid of his infection and was painlessly mobile with a walker.

Six weeks later, the second stage of surgery was done. In this, the cement spacer was removed and bone was fixed to the length with an internal plate. To fill the 10 cm gap, a rail fixator was applied outside the bone and an artificial cut was made in his native bone. The native bone would be lengthened at the rate of 0.5 mm to 1mm per day, using the rail fixator and would result in a gap being filled by the natural bone.

Currently, bone transport (pulling apart of bone fragments after creating an artificial fracture) has been started to fill the gap gradually with the patient having a good function of the knee joint and is allowed full weight bearing with a walker. The benefit of this rail-plate technique is that it regenerates the patient’s natural bone and the duration of treatment is much lesser, making it more patient-friendly.

The incidence of high-energy trauma and an open fracture of limbs is on an increase due to an upsurge in rash driving, especially among the younger population. Complications like this are common despite adequate primary treatment.

This technique allows eradication of infection and gradually allows the new bone formation of all the removed bone (known as distraction histogenesis), regaining of limb length, preservation of limb function and early weight-bearing with shorter duration of whole treatment (as compared to previous treatment modalities), elaborated Dr. Gupta. Fortis Hospital, Mohali has all the necessary infrastructure and experts for handling such patients. The limb reconstruction and deformity correction unit of the orthopedics department headed by Dr. Sandeep Gupta has been effectively managing such cases and is one of the spearhead centers in North India with an excellent outcome.

CMA organized a seminar on Make in India at...