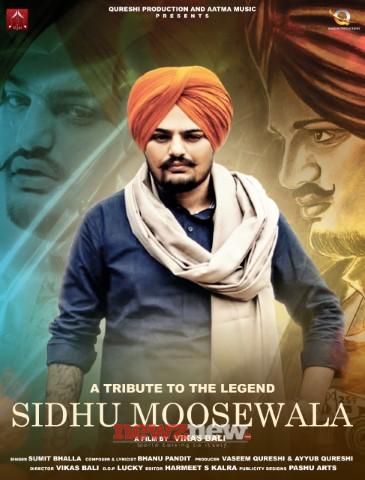 The music video is shot in actual locations where the unfortunate assassination of noted singer Sidhu Moosewala too place. The makers have shot the film ‘A Tribute to the Legend SIDHU MOSSEWALA’ extensively in Punjab’s Moosa Pind and the unit also procured permission to shoot in Sidhu’s home and adjacent areas.
Vaseem Qureshi of Aatma Music spoke his heart out, “The world is aware that Moose Wala was shot dead by unidentified assailants on 29 May 2022 and this has cut short the journey of a priceless diamond in Punjab’s music and film industry. It is a great loss to millions of his fans across India and the world over. We at Aatma Music have done our best to keep alive Sidhu Moosewala’s music and this is the least we could have done,” says Vaseem.
“Sidhu Moosewala is probably the greatest Punjabi artist of current generation and I have never seen such an adulation from his fans. He is considered as a key figure in opening the doors for Punjabi artistes into mainstream music,” Ayyub Qureshi of Aatma Music mentioned.
“Composer and Lyricist Bhanu Pandit has come up with such a soul stirring eulogy that is a touching piece of writing that go beyond words for one of the most promising and greatest singer, rapper, songwriter and actor associated with Punjabi music and Punjabi cinema,” says Karan Ramani, the CEO of Aatma Music.
Presented by Qureshi Productions and Aatma Music, ‘A Tribute to the Legend SIDHU MOSSEWALA’ is directed by Vikas Bali and is produced by Vaseem Qureshi and Ayyub Qureshi. Singer Sumit Bhalla and composer and lyricist Bhanu Pandit have come up with such an intense memorial respect to the remarkable Punjabi artist. The film’s DOP is by Lucky and is aptly edited by Harmeet S Kalra.
Also Read :   NBSE Result 2018: Nagaland Class 10th and 12th board results Declared at nbsenagaland.com

Do not be scared of Cancer – Fight it, Says Doctor