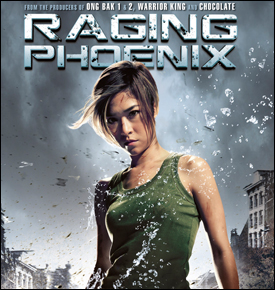 NewZNew (Chandigarh) : &pictures, India’s leading premium Hindi movie channel, has introduced a new genre for entertainment buffs – Chiniwood. Going by the mantra ‘Bollywood se zyaada masala, Hollywood se zyaada action’, the martial arts film festival Chiniwood is seeing some of world’s biggest martial arts action heroes like Tony Jaa, Jackie Chan and Jet Li amongst others fighting it out. The latest offering in this line-up is JeeJa Yanin’s blockbuster ‘Raging Phoenix’ in Hindi on Friday, 25th March at 8 PM. The movie is based on Thai martial arts starring JeeJa Yanin in her second film and is directed by Rashane Limtrakul.

Deu (JeeJa Yanin) meets three martial arts masters and one of them being  Sanim (Kazu Patrick Tang). She convinces them to train her in their martial arts style and learns that they have come together to defeat the Jaguar Gang, who abduct young women. She falls for Sanim while he trains her but learns that he is in love with someone else.

In the midst of this, Deu is kidnapped by the Jaguar Gang. Will Sanim and crew save her or Deu will be able to use her martial arts skills and escape from the trap of Jaguar Gang?

~To find out more, tune-in to Chiniwood – ‘Raging Phoenix’ on Friday, 25th March at 8 PM, only on &pictures~