Justice Ajay Kumar Mittal, appreciated the efforts of the Sarin Memorial Legal Aid Foundation and Leiden University in drawing up a wonderful proposition on air law, which raised legal issues concerning countries and people around the globe. This years Competition focusses on State subsidies to airlines, currently an ongoing issue between USA and UAE airlines. 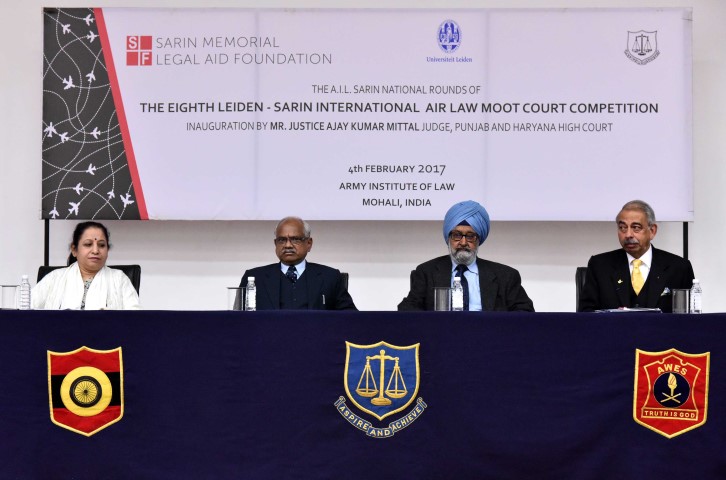 Sarin Memorial Legal Aid Foundation had initiated the moot court competition in the field of air law in 2010, which is first-of-its-kind in the world, and has received tremendous response from law schools from around the globe, said Justice (retd) S.S. Sodhi, President of the Foundation.

The issue for the moot court discussions was on the ongoing tussle between US and UAE airlines where American carriers allege unfair advantage that UAE carriers get because of the government’s subsidies.

The finalist teams shall participate in the international moot court competition to be held in Valletta, Malta from April 6-9, 2017, where the winner stands the chance to win a fully-paid scholarship for the Advanced LL.M. in Air and Space Law at Leiden University in the Netherlands.

Sarin hoped that one of the three finalists from India shall win the international finals in Malta, where teams from 16 countries shall be competing for the prestigious award including India, Nepal, the USA, Australia, Indonesia, China, the Netherlands, Canada, Ukraine, New Zealand, Romania, Sri Lanka, Nigeria, Serbia, Poland, the UAE, Singapore, Greece, South Korea and France.

Nitin Sarin, the Moot Co-ordinator informed that the first edition of the competition in air law was organised in Delhi in March 2010, and its success led to the invitation by Dubai Civil Aviation Authority who hosted the 2011 edition, with later editions being held in Istanbul University, Istanbul, Turkey in 2012, Abu Dhabi, UAE in 2013, Bucharest, Romania in 2014, Beijing, China in 2015, Jakarta, Indonesia in 2016 while this year’s competition is slated in Valetta, Malta.

The Leiden-Sarin International Air Law Moot Court is a pioneering event founded by the Sarin Memorial Legal Aid Foundation and Leiden University, the Netherlands. It is the only moot court competition in the world on air law, a fascinating and growing field of law.

NTSE Scholar is a FIITJEEian with 406 selections out of 775