Budding footballer successfully treated for complex elbow injury through Elbow Arthroscopy at Fortis Mohali: 19-year-old budding football player Abdul Rahim was in debilitating pain and discomfort after injuring his left elbow during a practice match in March 2021. Under distress and pain, the Patient visited a local hospital where after subsequent medical examination, he was covered in a plaster cast. 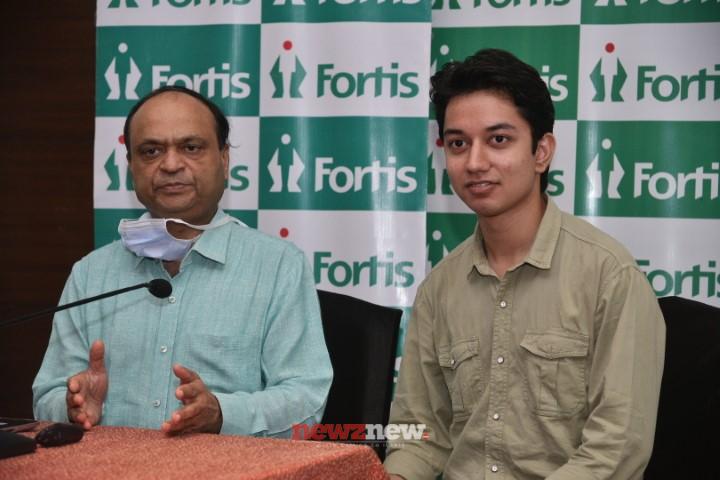 The plaster was removed after one-and-a-half months in April last year, following which he underwent physiotherapy and rehabilitation exercises. However, even after 14 months, the Patient was unable to move his left elbow as it had become stiff. This not only stalled his participation in football game, but he was not able to do his activities of daily living due to stiff elbow.

On 9th March this year, about 14 months after getting injured, the Patient finally approached Dr Ravi Gupta, Director of Orthopaedics (Sports Medicine), Fortis Hospital Mohali. Clinical examination revealed that the Patient’s ‘Range of Motion (ROM)’ of the left elbow was between 45 degrees to 90 degrees, whereas the normal elbow ROM is 0 degrees to 150 degrees. The CT Scan revealed unwanted bone growth around the elbow called Myositis Ossificans.

Myositis Ossificans is a common cause of still elbow in the young population after elbow trauma.

On 14th March this year, the team of doctors led by Dr Gupta released all Intra-articular adhesions (IA) as well as Myositis Ossificans from the Patient’s elbow using the most recent techniques of Elbow Arthroscopy and Mini Open.

Elbow Arthroscopy is a minimally-invasive surgical procedure wherein the surgeon inserts a small camera, called an Arthroscope, into the elbow joint, providing a clear view of the surgical field. During the surgery itself, a full range of motion of the elbow was achieved.

Following good rehabilitation at Fortis Mohali, the Patient was discharged two days after the surgery. He has recovered fully and was able to resume his football practice two months after the procedure.

Discussing the line of treatment, Dr Gupta, said, “Elbow Arthroscopy is one of the latest, minimally-invasive, and rare surgical techniques available at Fortis Hospital Mohali. The procedure gives minimal surgical scars and leads to rapid recovery.”

Dr Gupta is amongst the pioneers in India who developed and standardized the technique of Elbow Arthroscopy around 20 years ago. This technique has turned out to be a boon for patients with elbow injuries.

Fortis Healthcare Limited – an IHH Healthcare Berhad Company – is a leading integrated healthcare services provider in India. It is one of the largest healthcare organizations in the country with 27 healthcare facilities (including projects under development), 4100 operational beds and over 419 diagnostics centres (including JVs).

Fortis is present in India, United Arab Emirates (UAE) & Sri Lanka. The Company is listed on the BSE Ltd and National Stock Exchange (NSE) of India. It draws strength from its partnership with global major and parent company, IHH, to build upon its culture of world-class patient care and superlative clinical excellence.

Fortis employs 23,000 people (including SRL) who share its vision of becoming the world’s most trusted healthcare network. Fortis offers a full spectrum of integrated healthcare services ranging from clinics to quaternary care facilities and a wide range of ancillary services.