newznew (Chandigarh) : Central University of Haryana (Mahendragarh) (with his best performance among various central universities) got first position in the financial literacy campaign organized on behalf of Ministry of Human Resource Development for promoting cashless payment. Among 4,896 educational institutions that participated in this campaign, Central University of Haryana (CUH) got 7th position among top 20 institutions. As far as central universities are concerned CUH bagged the first place whereas second position has been obtained by Central Universityof Punjab. Under this campaign, three students from the University received the best volunteer certificate as well as a tablet as an award. The award was conferred by the Union Human Resources Development Minister Prakash Javadekar and Union Minister for Electronics & Information Technology Ravi Shankar Prasad in National Conference on Financial Literacy held in Delhi recently. 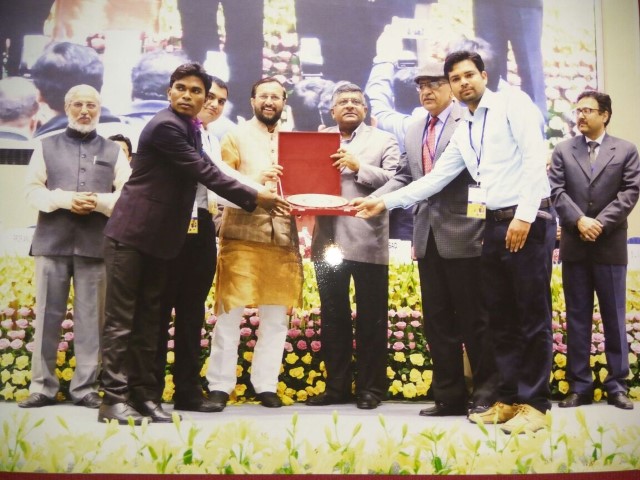 University Vice Chancellor Professor R.C. Kuhad said that it is a matter of pride for us that we have got seventh place among 4,896 educational institutions that participated in the campaign and got first position among central universities. Vice Chancellor said that in this campaign pupils, staff and teachers worked together and as a result not only the performance of the university has been notable but our three students has also been awarded with the best volunteer prize. Professor Kuhad said that while this success is a matter to be proud of, on the other way also inspire us for better performance in future.

Dean students’ welfare, Prof. Umed Singh, while participating in this National Conference along with the students in Delhi’s Vigyan Bhawan, said that this is a big achievement and also increase our responsibility to continue our efforts on financial literacy front in future too. In this campaign, Nodal officer of the University, Dr. Anand Sharma, Information Scientist Vinita Malikand System Analyst Deepak Bhardwaj explained that in Financial Literacy Campaign, the performance of the University has been the best since very beginning. The University had also achieved third place on the volunteer registration level too. The university student Ashutosh Kumar Aahire, Ram Kumar and Jayant Hudda, who achieved the best volunteer certificate explained, that in this campaign they contacted  nearly 3,000 people and made them aware about digital payment.  The area around the  Central University of Haryana is rural , personal contact was more important. Local people seriously paid their attention on the message of the students & teachers and not only understood the digital payment methods but even started following them too.