NewZNew (Chandigarh) : Phased reduction of the Corporate Tax to 25% in next four years will lead to higher investments into the economy leading to higher economic growth and creation of more jobs, said Mr Pradeep R Sethi, Principal Chief Commissioner – Income Tax, North West Region, Government of India at the Session on ‘Union Budget: Insights & Analysis’ organised by Confederation of Indian Industry (CII) Northern Region in association with KPMG at CII NR Headquarters in sector 31 A, here today. The focus of the session was to provide an in-depth analysis of the recently announced Union Budget vis-a-vis the policy initiatives, taxation aspects and the industry perspective on the budget. 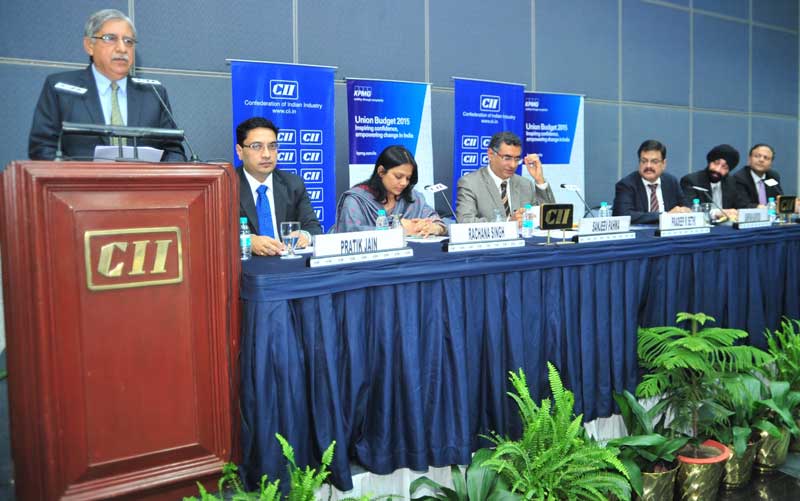 Mr Sethi said that Union Budget 2015-16 has reiterated Government’s commitment to provide a non-adversarial tax regime which is transparent, predictable and spurs growth in the economy. Focus of the tax administration is to broad base the tax base through non-intrusive measures, he added.

The announcement of steps like Bill for a comprehensive new law to deal with black money parked abroad and Benami Transactions (Prohibition) Bill will curb domestic black money, said Mr Sethi. The Government has fortified its focus on curbing the generation of black money in the economy and dealing with its concealment effectively and forcefully. Further, modifications in the Permanent Establishment (PE) norms is a welcome step as the fund managers will be encouraged to relocate to India which will attract news investments in the country, he added.

Earlier, while setting the context, Mr Sanjeev Pahwa, Chairman, CII Punjab State Council & Managing Director, RALSON termed this year’s Budget as growth-oriented and pragmatic one. This Budget has attempted to kick-start the investment process by investing from public sources. Although this would have some impact on the path for fiscal consolidation, CII welcomes the move as long as the extra money is used for capital expenditure rather than on current revenue spending, said Mr Pahwa.

The Finance Minister has also created opportunities for the corporate sector to go for investment spending, Mr Pahwa informed. The measures taken to improve the investment climate and ease of doing business is very positive, he added.

Sharing his perspective on the Union Budget, Mr Nabin Ballodia, Partner – International Tax & Regulatory, KPMG in India said that overall it is a pragmatic balanced budget laying down the intent and the direction of the government, emphasising on growth and development. Announcements like reducing corporate tax rate and taxes on royalty & technical service fee payable to non residents, commitment to introduce GST and reassurance on retrospective tax and indirect transfer tax would encourage global investors, he added.

Overall, the Budget has flavours of populist measures in the form of mass inclusion to pension & medical insurance and reformists thought process in the form of impetus to infrastructure, gold monetization and checks on black money, said Mr Ballodia.

A journey well begun – the next challenge would be to implement the schemes and initiatives, so as to convert the intent into real action leading to results, remarked Mr Ballodia.

Some of the rationalization carried out in penal provision will help in reducing the unnecessary litigations, said Ms Rachana Singh, Deputy Commissioner, Central Excise & Service Tax, Government of India. Moving towards more technology friendly environment, the provision of digitally signed invoices have been introduced in the Budget, she added.

On the issue of 2% Swacch Bharat Cess, Ms Singh hoped that CBEC will issue clarification on whether this will be computed on taxable value or on the tax.

Elaborating on the indirect taxation, Mr Pratik Jain, Partner-Indirect Tax, KPMG in India said that the long expected GST seems to be closer to reality now, with the Finance Minister reaffirming its rollout with effect from April 1, 2016. Several measures have been announced in the Budget to smoothen its implementation. The Government has also attempted to ease doing business in India which is welcome, said Mr Jain. He mentioned that online time bound registrations, digitally signed invoices, maintenance of electronic records are steps in the right direction.

This Budget has taken certain steps to boost manufacturing for the success of Make in India campaign, one of which is the rationalization of inverted duty structure, Mr Jain added. While increase in service tax by 2 per cent may come as a disappointment to consumers, it is necessary as a run-up to GST. However, the Swachh Bharat Cess up to 2 per cent is not in line with GST and should be reconsidered by the Government.

the delegates at the Session, Mr Darpan Kapoor, Chairman, CII Chandigarh Council & Managing Director, Kapsons Fashion (P) Ltd. said that the Finance Minister has announced several proposals to augment infrastructure development which eventually will enable industrial growth. He mentioned that the ongoing process of establishing an electronic Trade Receivables Discounting System for financing of trade receivables of MSMEs, from corporate and other buyers, through multiple financiers should improve the liquidity in the MSME sector significantly.