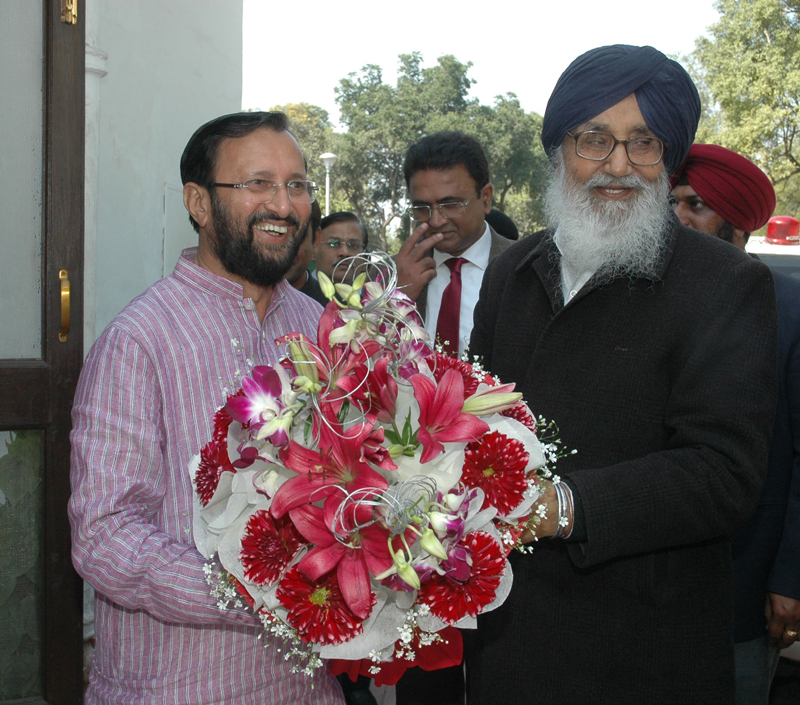 The Chief Minister, who called on Mr. Javadekar here at his residence this afternoon, said that that the rates of water cess have not been revised since May, 2003 adding that the need of the hour was to have an upward revision in it. Strongly pleading the case for increase in rate of water cess, Mr. Badal said that it was imperative for strengthening the financial position of the state boards. “Due to ever increasing work load of the state Pollution Control Boards there is a genuine need to increase their financial resource base for which this revision is urgently required” he added.

Flagging up the case of change in criterion of allocation of receipts collected from Water Cess, the Chief Minister said that the proceeds levied under the Water Cess Act 1977 were to be first credited to the Consolidated fund of India, of which 80% was reimbursed to the respective state Boards for their utilization in various activities. However, Mr. Badal said that this reimbursement takes a long time thereby hampering the functioning of the state boards. Henceforth, he urged the Union Minister that the state boards might be allowed to retain 80% of the water cess share and balance 20% should be sent to MoEF.

Raising another important issue, the Chief Minister sought the personal intervention of Mr. Javadekar for directing the Ministry to expedite the process of giving environmental clearances for 62 mining projects. He said that out of 89 mining projects submitted till date, environmental clearances of only 27 quarries have been granted so far. Likewise, Mr. Badal said that as 45 mines have been allotted to Executive Director, Punjab Small Industries & Export Corporation Ltd., Chandigarh, so the MoEF has since been requested to transfer the environmental clearances in the name of the Executive Director, Punjab Small Industries & Export Corporation Ltd.

Referring to the cleaning of Budha Nullah, the Chief Minister told Mr. Javadekar that a bio-remediation project was sanctioned by MoEF in April 2012 at a cost of Rs 15.28 crore for construction of five green bridges adding that under this project three green bridges have been completed and remaining two would be completed by March 15, 2015. He urged the Union Minister to construct five more Green Bridges under the project as the downstream of the Nullah was about 16 kilometer long.

Responding to the various issues raised by the Chief Minister, Mr. Javadekar assured fulsome support and cooperation to him adding that the MoEF would soon take a call on these vital issues raised by him.