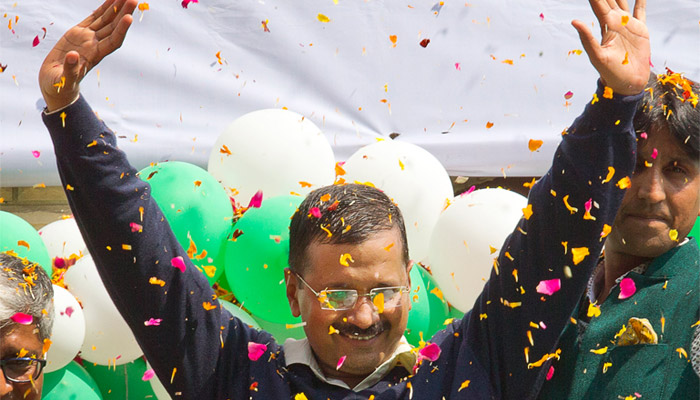 1:55 pm: Arvind Kejriwal celebrating the victory with his family.

1:50 pm: People wanted to teach BJP and its arrogance a lesson, they decided AAP is instrument of their choice rather Congress – Manish Tewari

What is the reason behind AAP’s victory in Delhi? in Nation on LockerDome
Related Videos
Aam Aadmi Party​ headed for sweep as Kiran Bedi​ trails

1:17 pm: I remain a member of BJP, I’m happy to be a member of a strong national party – Kiran Bedi

1:04 pm: Full marks to Arvind Kejriwal and his team. His victory is the reward of five years of hard work by them – Kiran Bedi

12:56 pm: I thank the BJP leadership which inspired me to take up CM candidateship, says Kiran Bedi

11:55 am: I am sure together with the people we can make Delhi a place, of which everyone will be proud – Kejriwal

11:47 am: Appeal to all my MLAs and our workers, do not be arrogant at all – Kejriwal

11:45 am: This win is scary. The kind of support people of Delhi has given us, I would like to tell all workers not to be arrogant, says Kejriwal.

11:42 am: Arvind Kejriwal waves to his supporters amid loud cheer, congratulates people of Delhi. We moved ahead on the path of truth and won, says Kejriwal.

11:30 am: A huge setback for BJP, we did not think of such huge defeat. The entire Congress vote shifted to AAP, this is the prime statistical reason, we will analyse, says Sudhanshu Trivedi of BJP.

11:15 am: Arvind Kejriwal calls up Anna Hazare to seek his blessings.

11:01 am: PM congratulated Arvindji over phone,he accepted his wishes and is likely to see PM in next 2-3 days, says Bhagwant Mann of AAP.

10:50 am: I take responsibility for the defeat and have decided to resign as Congress general secretary, says Ajay Maken.

10:20 am: I hope Arvind Kejriwal does not make the same mistakes he made last time, says Anna Hazare

10:15 am: Prime Minister Narendra Modi telephones Arvind Kejriwal, congratulates him on his victory.

9:58 am: Arvind Kejriwal to take oath as the next chief minister of Delhi on Feb 14 at Ramlila Maidan. The AAP government had resigned on the same date last year.

9:53 am: “Priyanka lao desh bacahao” slogans go up outside Congress office in Delhi.

Also Read: Call for ‘Priyanka lao, party Bachao’ gets louder as Congress heads for a rout in Delhi

9:52 am: Former union minister Krishna Tirath who had joined BJP ahead of the polls is trailing behind AAP’s Hazari Lal Chauhan by 6844 votes.

9:40 am: Results are not on expected lines, we will introspect on why people lost their faith in us: Shahnawaz Hussain, BJP.

Our votes are intact, but all Cong votes shifted to AAP,we are still hopeful: Shahnawaz Hussain,BJP.

9:15 am: Delhi has voted decisively in favour of Arvind Kejriwal-led Aam Aadmi Party in Delhi Assembly Election 2015. As per the latest trends at 9:15 am, of the 70 assembly constituencies, the AAP is past the halfway mark with leads in 41 seats, the BJP is a poor second with 10 seats and the Congress has been decimated at 3 seats.

8:50 am: We hope results are better than exit polls, trends show that Delhi wants an honest govt, says Manish Sisodia

8:48 am: Even if we get two seats, it is better than what exit polls predicted, says Congress’ Ajay Maken.

8:27 am: Sitting MLA Manish Sisodia ahead in Patparganj.

8:18 am: We will win today, says AAP leader Kumar Vishwas.

8:17 am: CP Mittal of Congress leads in Hari Nagar.

8:12 am: First trends: Vijender Gupta of the BJP leads in Rohini; AAP’s Rakhi Birla ahead in Mangolpuri.

8:03 am: Arvind Kejriwal leaves from his residence in Ghaziabad for Patel Nagar office where party workers are already celebrating the possible win of AAP in the assembly polls.

8 am: Counting of votes for Delhi Assembly Election 2015 began at 8 am across 14 centres in the national capital. Both the Aam Aadmi Party (AAP) and the Bharatiya Janata Party (BJP) are hoping for a win even as the exit polls overwhelmingly predicted a win for the Arvind Kejriwal-led party.

The Congress appears reconciled that it will finish third and party leaders are hoping its tally is not worse than eight it won in the 2013 election.

According to the exit polls, the AAP was likely to get between 31 and a staggering 54 seats while the BJP could bag 17 to 35 seats. The Congress, which ruled Delhi for 15 years till December 2013, would win at most four seats, they said.

Analysts are saying that the results in Delhi will have wider political ramifications, particularly for the BJP, which has had a good electoral run since the Lok Sabha elections in May last year.

Stages have been erected outside the AAP office in East Patel Nagar for the media and volunteers. Four LED televisions sets have been installed in the open by AAP for workers to see trends and results. Kejriwal is expected to arrive at party headquarters in the afternoon to address people.

In its maiden election December 2013, the AAP stunningly won 28 seats compared to 31 of BJP and formed a government with Congress backing after a hung assembly. The AAP government resigned after 49 days.

BJP’s chief ministerial candidate Kiran Bedi, who Monday addressed BJP workers at Karkardooma in her Krishna Nagar constituency and expressed gratitude for their support, said the party was expecting a victory.

Over 10,000 security personnel, including from the paramilitary forces have been guarding 20,000 electronic voting machines (EVM) which contain the votes cast in Delhi on Saturday, February 07.

Delhi saw a voter turnout of 67.14 percent Saturday and 673 candidates are in fray. Polling had taken place at 12,177 polling stations, of which 714 were identified as “critical”. Of these, 191 were “highly critical”.

The Burari constituency in North Delhi has a maximum of 18 candidates while the Ambedkar Nagar seat in South Delhi has the lowest number of contenders at four.

There are 63 contesting women candidates in this election as against 71 in 2013.  The number of candidates from recognised national and state parties is 296 while 183 candidates belong to registered parties and there are 194 Independent nominees.

Congress, which exit polls have predicted will finish a distant third, is apparently not keeping too much expectations. PC Chacko, who is party in-charge of Delhi, said that the party does not believe in exit polls and they were waiting for actual results.