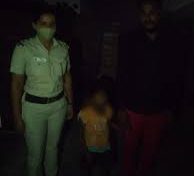 All the staff at South Delhi’s Kotla Mubarakpur police station put every possible effort both physically as well as through social media to search the parents of the girl when she was taken there by a woman on Wednesday after she found her abandoned in the area.

On Wednesday, one Jyoti, a resident of Kotla Mubarakpur, found the girl in Sewa Nagar Subzi Mandi Market. She tried to search her parents in the nearby area but nothing fruitful came out.

Thereafter, the girl was taken to police station, and it was brought into the notice of Inspector Vinay Tyagi, Station House Officer (SHO) of Kotla Mubarakpur Police Station.

Tyagi put all efforts with his staff and girl’s photograph was shared with nearby police stations, WhatsApp groups, market committee groups and police mitra group, and all the staff were briefed to search the whereabouts of the girl’s parents.

Girl’s father Dharambir, a resident of Bapu Park in K.M. Pur, said that her daughter went missing from home while playing with her siblings.

“Parents of the girl were also searching for her but unable to locate her.”

The officer said that efforts of Sub Inspectors Sohan Lal and Komal gave result, and the baby girl was united with her family. “Police Team of PS KM Pur received a lot of blessings from the family of the baby girl.”

In view of global pandemic Covid-19, Thakur said crime prevention and patrolling was intensified as per direction of senior officers to prevent any mishappening. “Effective foot patrolling gave us good result.”