Doctor among five arrested for making fake Covid reports in Delhi: Cracking its whip on the people involved in preparing false Covid reports, the Delhi police on Friday said it had arrested five people, including a doctor, from Malviya Nagar area for preparing Covid reports using forged means. 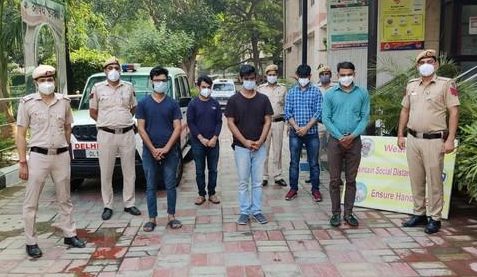 The DCP said that the police had received a PCR call on Thursday wherein it was mentioned that Genestrings lab in Malviya Nagar were involved in preparing fake Covid reports.

He said that on reaching the spot caller Vipul Saini stated that in April this year he along with his 45 relatives had given their samples for Coivid testing to Himanshu and Pragyanand Sharma.

On April 25, their known Rishab Shukla gave his sample to them and on April 26 he tested positive for Covid, but he did not show any symptom of Covid, he claimed.

The officer said that on April 28 Shukla again gave his sample to SPICE Health Laboratory where he tested negative.

The officer claimed that on April 29, Saini along with Himanshu Sharma and Pragyanand went to the Genestrings Lab and cross checked from above lab and found that the Covid report of Shukla was not in the records of this lab.

Also Read :   Farming Simulator 22 Announced: All You Need to Know

He said that by adopting this modus operandi the five accused persons have committed the crime of cheating and forgery by creating the Covid results on fake letter head of Genestrings Lab and by not entering the data of the virus infection samples in the lab.

Explaining the modus operandi of the accused, the DCP said, “Accused Himansu and Prgyananad are lab technicians who used to collect Covid samples from houses and later hand over the said samples to Dr Singh, application scientist at Genestrings Lab without making entry in the lab records.

” Singh with the help of his colleagues Satender and Nikhil used to telephonically send the report to Himanshu and Prgyanand, who used to prepare the reports on their laptop using the letter head of the above named lab. This latter was provided to them by Singh,” he added.