[dropcap]T[/dropcap]he Third cut-off list for admissions to various Undergraduate Courses (based on merit) of the University of Delhi (DU) for the Academic Year 2017-2018 is expected to be declared within few hours from now. Earlier, the second cut off was released by different colleges of the University. 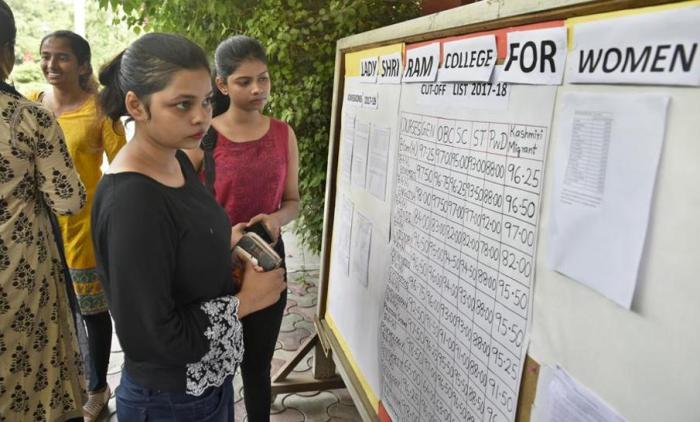 With the release of Second Cut Off List, several courses had registered a dip of up to 3%, which is expected to dip further with the publication of DU 3rd cut off 2017. The most significant fall in cut-offs were seen in off-campus colleges. On the other hand, many aspirants were left disappointed as several colleges announced that they had closed admissions for certain courses after the first list.

Another much sorted college, Lady Shri Ram College which had some of the highest cut-offs in the first list, closed its admissions to courses such as BA (Hons.) Economics, Hindi, History, Philosophy, Sanskrit, Sociology, BA (Programme) and B.Com (Hons). The highest cut-off in the second list was for BA (Hons) Psychology at 98.25% at LSR, which saw a drop of 0.25% from the first cut-off list. Even, the SGTB Khalsa College, which set the cut-off for B.Sc (Hons) Electronics at 99.66% in the first list, slashed it to 96% in the second list. The lowest cut-off of 44.75 percent for BA (Hons) Sanskrit has been announced by Lakshmibai College.

Among colleges in North Campus, admissions to almost all courses in Miranda House, Kirori Mal, Ramjas and Hans Raj College are still open. Hindu College has closed admissions in ten of its 18 courses.

Like previous years, the fall in cut-offs from the first list to the second has been marginal this year as well, especially for popular courses like English Hons and History Hons.

Next Step In The Process

Applicants who meet the cut-off now need to log in to the Delhi University portal to select the college and course they wish to take up according to the choices entered during registration.

They will then need to take a printout of the admission form and visit the respective colleges for verification of mark sheets and other documents. Admissions under the second cut-off list will begin on July 7, the dates can be checked from DU website. Students who have already taken admission in the second list and are clearing the cut-off at a college that they want to study in the third list will first have to cancel their admission in the college that they have taken admission in and then proceed to the next college of their choice.

The fourth and fifth cut-off lists will be released on July 13 and July 18 respectively.