newznew (Chandigarh) : Washington based EcoSikh has unveiled its four-point environmental agenda for the upcoming Government of Punjab to curb the ecological disaster of the state as part of it’s World Sikh Environment Day campaign.  Since 2010, EcoSikh has facilitated the celebration of the Sikh Environment Day marking the GurgaddiDiwas (enthronement day) of Guru HarRai, who became the 7th Sikh Guru in 1644.

He was known in history to have deep sensitivity for nature and animals and had asked his followers to care for the environment. Last year, over 3500 Sikh gurdwaras and educational institutions had celebrated this day by taking steps to environmental conservation in India and in several countries across the globe. EcoSikh is appealing to SGPC to set aside land for sacred forest in Kiratpur, Guru HarRai’s birth-place. 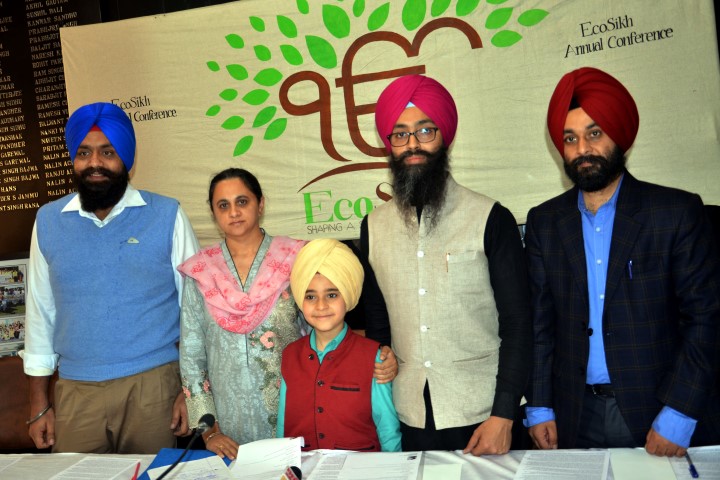 EcoSikh leadership has appealed to the upcoming Punjab administration to focus its energy on 4 specific ecological challenges and its solutions.

EcoSikh President, Supreet Kaur, said, “Punjab which has a mere 3.5% of forest cover and it witnessed 900,000 trees axed in the last 5 years so first priority should be to ensure that a well planned strategy is put in place to increase the forest area in the state. 2nd priority is to create awareness among farmers and among masses to conserve water and to ensure the industrial waste is treated before being dumped in the rivers. 3rd is to provide provisions and training to farmers to prevent stubble burning which is causing havoc in the health of masses all across the state and North India. Fourth is to encourage farmers with proper training to increase farming without overuse of harmful chemical pesticides.

She added, “EcoSikh is ready to help and will encourage other NGOs to become helpful partners in this direction provided the political leadership is serious in lifting Punjab out of catastrophic environmental disaster. As Punjabis, it is our duty to uphold the principles of living in harmony with nature as taught by Guru HarRaiji.”

Dr.Rajwant Singh, EcoSikh’s global President, stated, “SGPC should declare 100 acres of its land as a sacred forest dedicated to the memory of Guru HarRaiji in Kiratpur Sahib. Kiratpur is slowly becoming associated with last rituals only where as this is the place where we need to learn how to live. Having a forest in Guru ji’s memory will continue to inspire Punjabis to live with green consciousness. Sikhs from all across the world would flock to such inspirational place and it could bring eco-tourism to the area.” 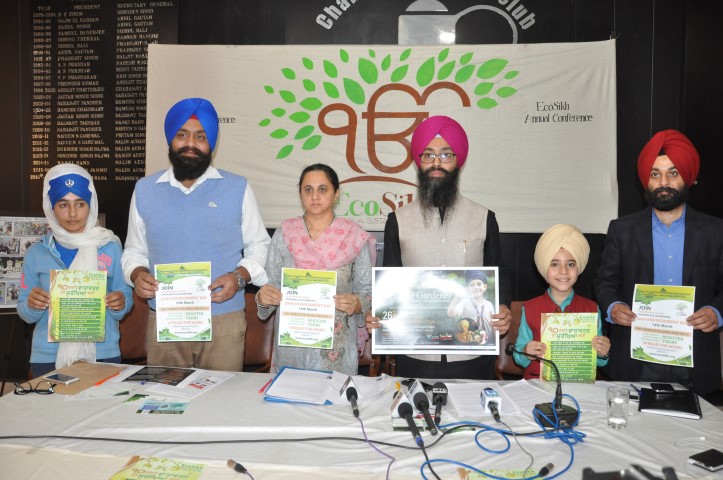 EcoSikh South Asia Project Manager, Ravneet Singh, said, “This year the Sikh Environment Day is being celebrated with marathons, bicycle rallies, and several plantation events all across India and in Punjab. There are many gurdwaras in Europe and in Punjab are edging towards organic langar, an initiative launched last year by EcoSikh on this day.” He added, “We appreciate that SGPC has increased organic farming for Golden Temple langar from 5 acres to 12. We would request them to start a similar initiative for TakhtKeshgarh Sahib since there is plenty of land which is available in this area and in Kiratpur Sahib. EcoSikh has suggested 7 green ways to celebrate the 7th Sikh Guru’s day and this has become particularly attractive for youth across the globe.

Jaspreet Singh who is member of Chamber of Industries & Commercial Undertaking(CICU), Ludhiana , & a renowned industrialist from Ludhiana, said, “Any dyeing industry has a daily water demand of 10 lakh litres for its operation. If the Punjab government is serious about the sustenance of industry, it has to provide us water treatment plants at cluster levelin the industrial zones and recycle the waste water at subsidized rate. Punjab also needs a specialized technical board to draft a policy on utilization of treated water.”

EcoSikh also declared its kitchen gardening programme here at the press conference in partnership with Vigaas Foundation. The duo organizations have plans to start organic kitchen gardens in 50 villages in the coming year. Shahbaz Singh, a young environmentalist has taken an initiative to start vegetable plantation in the Gurdwara premises as well as along the boundaries. These vegetables are grown organically and can be used in langaralso. Said Shahbaz Singh, “The vegetable gardens will not only feed the sangat but it will spread the word about the Nanak way of farming too.”

The past seven years of EcoSikh campaigning has brought hundreds of trees planted by the Gurdwaras and educational institutions, and over 2000 trees planted by EcoSikh itself in Amritsar. Clean and green nagarkirtans established India-wide, 3 historical gardens associated with Sikh Gurus revived in Punjab, initiated the idea of organic langar at the Golden Temple and now being adopted by other gurdwaras, many Gurdwaras switched from harmful Styrofoamproducts to metal utensils and biodegradable pattals, granthis and preachers trained on environmental issues and lastly the Gurdwaras around the world are now very active in environmental action since the start of Sikh Environment Day in 2010.

Punjabi Movie Kaptaan to be release on 25th March’16