Elite Season 4 Is Finally On Netflix| Sneak-Peek At The Show: The baddest student story is all here to set your life more complicated with a more confusing story this time. You must understand by now that I am talking about Elite here. 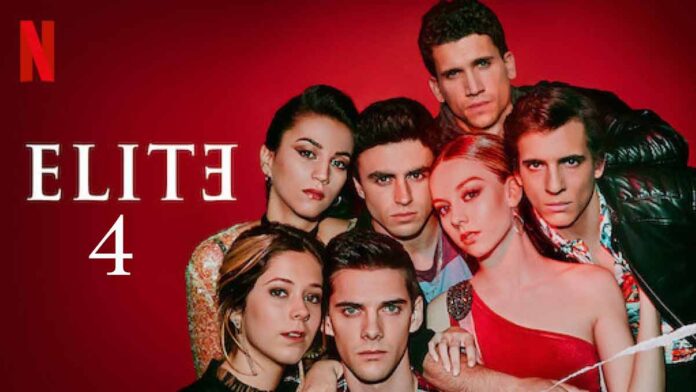 It the one of the most loved Spanish teen drama series which is being another jamming thing for the people now. The show has already topped the category of “Top 10 Best Drama On Netflix”.

With its brand new season 4, there will be several new factors that are going to take place. The show creators have already released the Official trailer of season 4 on youtube and just in a few weeks, the show has crossed a million views.

The fans of this Spanish drama are waiting very long for season 4 and so do we. this time, there will be different things and of course more sexual content. Season 4 is surely going to break all the previous relationships and we, fans, shipped for 3 years continuously.

If you have watched the official trailer then you would definitely go to get what I am trying to say. Well, keep everything aside for a while. Let me tell you that this series is bringing back its new seasons 4 and in this article, we will be going to look at it.

Find all of the important news from the confirmed release date to the plot in the next few minutes of this article. Keep reading to know what will happen to your favorite show this year.

Teen wolf, the romantic-thriller story, is planning for a new season? Well, check out our article to find out the exact details for it.

Elite Season 4 – When It is Coming on Netflix?

So many fans are wondering when the series will actually come into Netflix. Elite which is a popular Netflix exclusive series and they are the company that is responsible for the production of this Spanish show has released the official date of this show.

The show has confirmed the release date of this show i.e. 18th June. But as the company is known to release the show according to the time frame and many fans might find it difficult to find an actual date then don’t worry. The headquarters of the Netflix series provide the release of the series normally at 12 AM PT. Now you can check the time according to your countries and find out when the series is actually releasing in your area.

The Mandalorian series is dropping its brand new season. Well if you are curious to know the season updates then check out our article and get the recent updates for the new season.

Elite Season 4 – What will it be about?

The first season of Elite was released on 5 October 2018 with suspense and crime-related theme. I was personally attracted to the series after watching the trailer because it looks quite suspenseful and I can surely say many of the fans of this series will agree with it. The first season of Elite revolves around Elite schools which have different groups of people. Most of the kids are from elite and rich families while others are through academic and performance-based scholarship.

After watching the show, the one thing that I get straight about the series is that the kids of the school do everything except study. Keeping the jokes aside, the first season revolves around Mariana. Then there was the sudden disappearance of Samuel and season 2 centralized the whole story.

As season 3 arrives and we came forward with the polo and about his murder. But what will happen in season 3? While the starting three seasons completely take you to the criminal world of the world, the fourth one is a little different.

As Netflix has already made the pride love their priority and most of the series does have at least one of the same couple and stories. Series like atypical, Sex Education is one of them. Now the same goes with season 4 of Elite as the trailer is pretty much telling us about all the hookups and couple’s hookups. There is more than enough adult content that will satisfy your guilty pleasure in the show.

The heterosexuality of many characters has crossed the line and I was so shocked yet happy to watch the character opening up to the new environment.

Where Can I watch the Official trailer of this series?

Click the video below and watch the exclusive trailer of Elite and enjoy the all-new theme of this show.

Before ending this article, Let’s take a quick look at the ratings of this show. The IMDb rating of this show is 7.5/10. The Spanish show has 97% of rotten tomatoes. According to me, the ratings of the show are pretty nice ratings but the most attractive thing for the show is their audience rating summary.

The audience has rated the show with 4.7 ratings. Now, there is a much bigger audience who are satisfied with the whole storyline of the show. What do you think about this show, comment down below and let me know your thoughts on this series?

The new season 4 of the Elite series is here and this time there will be more cast than you usually thought, season 4 has reportedly new characters than the previous time and the story is also changed. The official trailer has made very things obvious to the fans like the season 4 will definitely going to break some of the relationships and there will be definitely new couples that will make us uwuu*.