In a press conference organized today in Chandigarh, Dr. Ajay Aggarwal, President Chandigarh chapter announced that IMA Chandigarh Will observe satyagrah by going on dawn to dusk fast on the eve of Gandhi Jayanti to press for their unfulfilled demands. 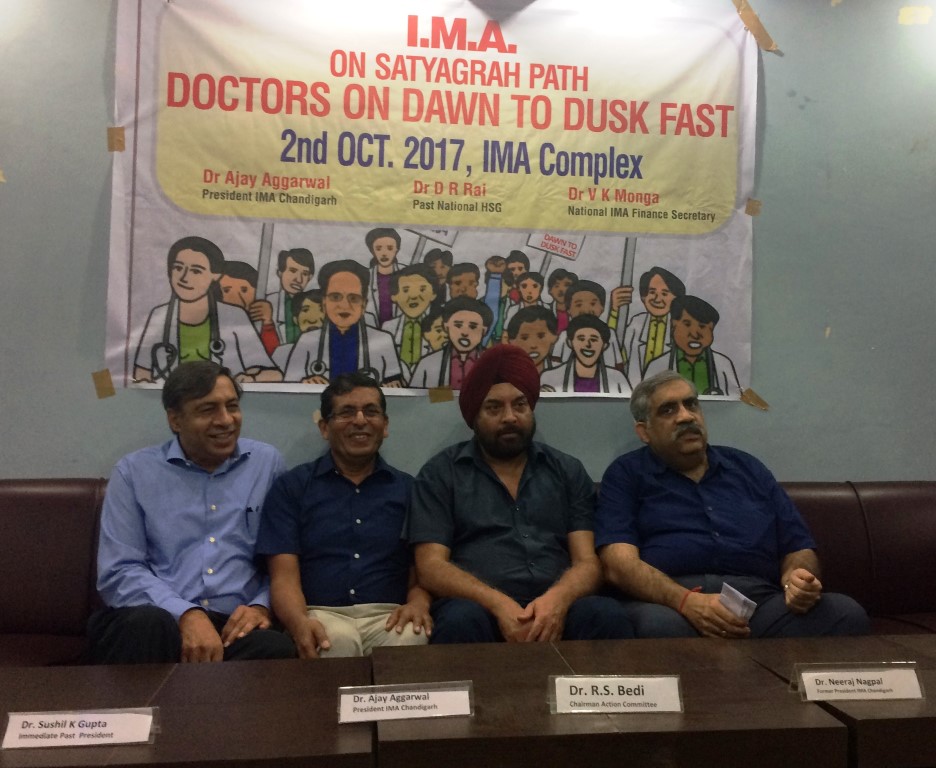 The day has also been commemorated as the ‘International Day of Non Violence’ by the United Nations in memory of Mahatma Gandhi, who was born on this day.

They will gather at IMA Complex, Sector 35, Chandigarh and hold a GBM to press their demands, and will write a open letter to PM to intervene and solve their problems.

This fast takes forward the “Dilli Chalo” movement of IMA held on the 6th of June and marks our continuing Satyagraha for a solution to the problems faced by the medical profession.

Dr Ajay Aggarwal, President of IMA Chandigarh said, “Incidence of violence and injustice against doctors are increasing at alarming rate. The ‘Prevention of Violence against Medical Personnel and Establishment Act, 2009’ has been implemented in almost 19 states, but very few convictions have been done in last 6 – 7 years.”He demanded that a more stringent Central Act under IPC is required to act as a deterrent against this mindless violence. Criminal Prosecution and arrest of doctors under sections 304 and 304A on patients’ complains of medical negligence has become order of the day. Doctors are also being prosecuted for minor procedural lapses like incomplete forms, not under PCPNDT ACT. Wearing name plate or apron etc He told that more than 70 doctors have been prosecuted in Punjab alone in last 4 years. Police and other authorities should be sensitised about this.

Dr D R Rai, past hony . Secretary General national IMA said that inter ministerial committee recommendations are still not acted upon. The whole medical fraternity is in anguish and wants personal intervention by the PM on our demands, or else we will be forced to go on indefinite. Another issue bothering doctors is ‘Crosspathy’ – Allowing Ayurvedic doctors to practice and prescribe allopathic medicines as has been announced by Government of Maharashtra, Haryana

Taking up another important issue, Dr R. S. Bedi, former President, IMA Chandigarh asked the Government to put a cap on compensation being awarded against doctors and hospitals under Consumer Protection Act. He gave example of AMRI Hospital, Kolkata which has been

asked to pay more than Rupees Eleven Crores to a patient for medical negligence.He stressed that there is a cap on compensation under a number of acts and policies – Road Accident victim – Rs 15 lakh, Rail accident victim Rs 8 lakh, complications during tubectomy – Rs 2 lakh etc. The current formula of calculating compensation in cases of medical negligence is based on income of patient, which is discriminatory.\

Dr Neeraj Nagpal , former President,IMA , Chandigarh said Doctors are wanting a stronger way of protest, but IMA has observed non-violent SATYAGRAH method to awaken the PM. A central ACT against violence is not negotiable. The government is hiding its inefficiency in providing emergency and quality healthcare to its people and putting the burden on private small scale doctors. It is un acceptable.

Dr V K Monga, National Finance Secretary IMA,said that suitable amendments in PCPNDT ACT should be made and there should be capping on the compensation as is done by the government itself in cases of rail, air accidents and tubectomy failure.

There is a huge concern about unjust clauses in CEA, clinical establishment act, like stabilization of patient before referral and free treatment in accident and assault cases. Government is shirking from taking care of the health of its poeple and passing the burden on small scale clinical establishments. This will close down the small centres, which are providing affordable, quality healthcare in the village’s, slums and neighbourhood.

The complete charter of demands is as follows: