Mr. C K Vineeth, Indian footballer officially flagged off the Paithalmala marathon, organized by District Tourism Promotion Councilof Kannurin the presence of Mr. K C Joseph MLA. The tourism board organized a vertical marathon in the districtfor about 4.5 km, out of which about 3.5 km were uphill.80contestants from Kerala, Tamil Nadu and Karnataka participated in the marathon. 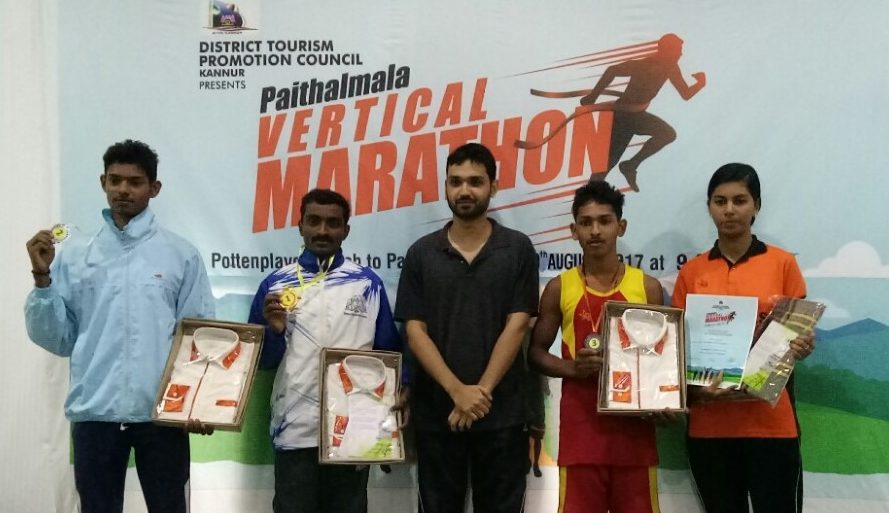 Mr. Shiju C.P won the marathon and was awarded with a cash prize of Rs. 10000, certificate and medal. Mr. Karthi P – second runner up and Mr. Josbin Dominic – third runner up of the marathon were awarded with cash prizes of Rs. 8000 and Rs. 6000 respectively. Moreover, Ms. Athira Michaelreceived prize, who stood first amongst the three ladies participants.

The district tourism board is keen on promoting the unexplored and pristine destinations of Keralaacross the world.Paithalmala, the scenic hill station in Kannur is one of the destinations that have immense untapped tourism potential in Kerala.

Speaking on the occasion, Mir Mohammed Ali, District Collector, Chairman – DTPC, Kannurstated, “Through this event, our objective was to promote the picturesque beauty of this magnificent destination. It was an opportunity for the travellersto experience amazing trekking experience in Paithalmala. Through such events, we attempt to promote the unexplored destination of Kerala to attract domestic as well as foreign tourists.”

Speaking on the occasion, C K Vineeth, Indian footballer stated thatit gives me immense pleasure to inaugurate the marathon, which was organized to promote the pristine destinations of Kerala. It is moment of pride to be associated with the state tourism’s initiative as I have played for Kerala Blasters in the Indian Super League (ISL) last year. It would be my pleasure to be associated with Kerala Tourism in future as well.

KadakampallySurendran, Minister of Tourism, Government of Kerala extended heartiest congratulations to all the winners of the marathon. “With the aim to double the domestic tourist arrivals and 50% increase in foreign tourist arrivals in the next five years, the tourism department will keep on organizing such events to promote the state tourism. The state has a lot of untapped tourism potential to attract maximum domestic as well as foreign tourists.” said Tourism Minister.

Paithalmala, formerly known as Vaithalmala, is a beautiful hill station located 4,500 feet above sea level near the Kerala-Karnataka border. The mountain is spread across 500 acres of dense forest. It is the tallest geographic peak, which is a perfect trekking destination for adventure enthusiasts. While trekking through waterfalls and dense forest, vacationers were thrilled and had a challenging experience. The beautiful view of the valleys and hills covered with mist is really breathtaking. One can indulge into the lush greenery amidst the showers throughout the day.

Towards the north of Kozhikode and Wayanad districts lies the district of Kannur, which is famous for its dazzling ritual performance called Theyyam. The land is a lively mélange of beautiful beaches, historic sites, interesting folk arts and folk music, rituals, religious practices and festivities. The district also is home to some of the traditional industrial sectors of Kerala. The region also has its place in the freedom struggle against the British.