newznew (Chandigarh) : Kurkure, the iconic Indian snack brand from PepsiCo, has been known for its innovations in Indian snacks. Keeping true to the essence of the brand, Kurkure announces the launch of a new and tastier version of Kurkure Masala Munch to capture exciting yet familiar ingredients from the kitchen in the pack. 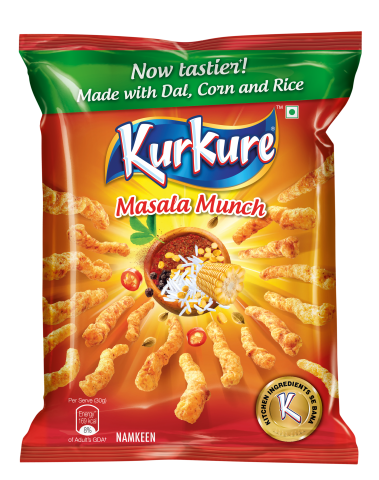 With new developments in the category, Kurkure reinforces its commitment to understand the Indian consumer’s preferences and introduce products which are best in quality, taste and ingredients.

Speaking at the launch, Vani Gupta Dandia, Marketing Director – Indian Snacks, PepsiCo India, says, “Kurkure as a brand has always been at the fore-front of innovations and has redefined the snacks category. The new Kurkure Masala Munch is a testament of our commitment to use top quality ingredient that enhance the consumption experience. The high quality dal, rice and corn along with ghar ka asli masala in Kurkure Masala Munch promises a tastier snack to the consumers. We intent to give you a burst of flavours with the wholesome taste of kitchen ingredients in every bite of the new Kurkure Masala Munch.”

Over the years, Kurkure campaigns have been designed to celebrate the family bonds in its many avatars. With the latest offerings, Kurkure re-invents its calling to ‘Kurkure Khul Jaye Toh Family Bann Jaye’- glorifying the blending of boundaries between people, encouraging them to embrace the wonder of making a family from new bonds we form in the many phases of life.

Kurkure has diversified by constantly adding new categories and varieties to its Masterbrand and innovating the portfolio. It successfully regionalized the flavours in traditional Namkeen category to match the Indian palates, available in 20 varieties that vary within every mile in India. The Kurkure Namkeen range represents the best Indian salty snacks from across the country.  Additionally, Kurkure recently broke new ground with the launch of Kurkure TrAngles, available in four exciting flavours which resonate well with the Indian palate.  In line with Kurkure’s aim to bring the right taste profile to the right regions, Kurkure Trangles comes in the quintessential Masala flavour and a smooth buttery one which is a unique taste profile offered only by Kurkure. Both these are available pan India. Alongside, Kurkure Trangles is also offered in taste bud tingling Achari flavours i.e Mango Achari and Lime Pickle, of which the former is present in the North & East markets, while the latter in South & West markets of India.

CGC Landran got accord recognition as SIRO