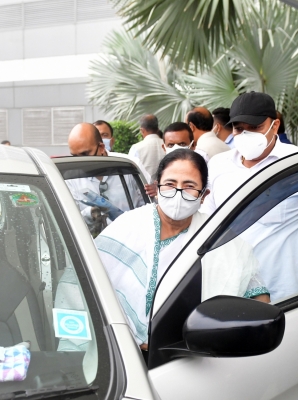 This is the first official meeting between Prime Minister and Banerjee in the national capital after she became chief minister of West Bengal for the third time after stunning victory in assembly polls. The meeting, held at Prime Minister’s residence, lasted for around 45 minutes.

It is learnt that during the meeting, Banerjee discussed Covid situation in the state and demanded more vaccines and medicines for the state.

In July, 2018, West Bengal assembly passed a resolution to change the name of the state to Bangla.

On issue of her meeting with the opposition leaders, Banerjee said, “Many parties and their leaders are old friends. I am meeting them.”

Banerjee also said that she will be meeting Congress interim president Sonia Gandhi on Wednesday.

“On Wednesday, I am meeting Sonia Gandhi. She has invited me for tea,” she said.

On her plan to bringing all opposition parties on one platform, She said, “Though the Lok Sabha polls are far away, we must have to start planning in advance. Assembly elections will be held in Uttar Pradesh, Punjab and Tripura. Our people were arrested in Tripura.”

Banerjee’s meeting with opposition leaders is being seen as an attempt to bring all the opposition parties together before 2024 Lok Sabha polls. She is also likely to meet NCP chief Sharad Pawar on Wednesday.

Mamata Banerjee is in Delhi on a five-day visit.