Home News Not in favour of total lockdown, but will impose if needed: Punjab...
Facebook
Twitter
WhatsApp
Email
Print
Telegram

Not in favour of total lockdown, but will impose if needed: Punjab CM: Even as he made it clear that he was not in favour of a complete and harsh lockdown, Punjab Chief Minister Amarinder Singh on Monday warned people against laxity in adherence to the curbs imposed in the state, and said if the situation did not improve, he would be forced to consider a total lockdown. 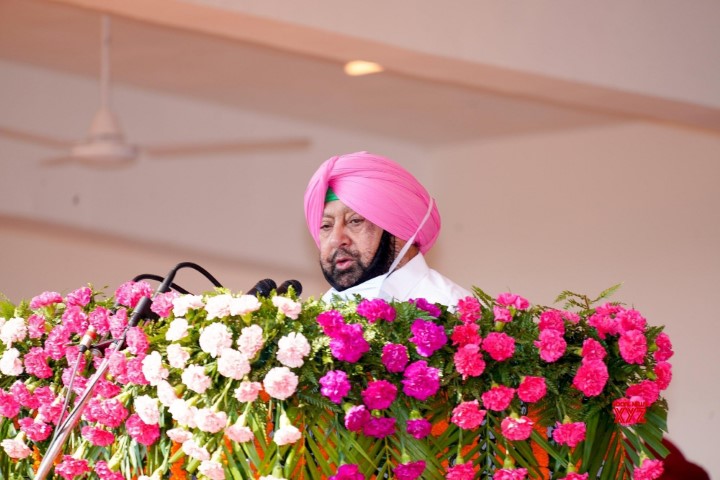 The Chief Minister said he had so far refrained from ordering a sweeping lockdown in the state because it will hurt the poor the most and would lead to exodus of migrant labourers, plunging industries into chaos again.

However, if the people do not stringently comply with the restrictions in place, harsher steps might have to be taken, he added.

The state is currently in a soft lockdown situation, with strong curbs in place, with additional restrictions imposed by the government on Sunday.

DGP Dinkar Gupta told the meeting that all measures were being taken to enforce the current curbs strictly.

Chairing a high-level virtual meeting to review the Covid situation, the Chief Minister on Monday also ordered a stop on all take-away deliveries from restaurants, which was being used by youngsters as a pretext to move out of their homes.

Only home deliveries of food should be allowed, he directed the officials. He, however, gave permission for shops selling fertilisers to be open.

Asserting that he will not allow Punjab to go the way of some other states, where patients could be seen lying out on the roads, the Chief Minister said that industry should be encouraged to use their CSR funds for vaccination and treatment of their labour suffering from mild or moderate illness, so that they can stay at home, thus reducing pressure on hospitals.

Underlining the need to step up preparedness amid projections of a peak in the coming days, he ordered 20 per cent increase in bed capacity in the next 10 days.

He directed the Health and Medical Education Departments to get stadiums, gymnasiums and other such places ready to house patients.

Tented camps should be set up, and gyms and halls should be converted into L2 and L3 facilities, he said, adding that “we have to be prepared for the worst”.

He also directed use of staff from Rural Development and other departments to augment the workforce for tracing of Covid contacts in rural areas.

The directives came as Health Minister Balbir Sidhu said the situation was grim with only 300 beds now available at L3 level in the state. Hospitals were getting overwhelmed, he added.

Health Secretary Hussan Lal pointed out that the state’s positivity rate had on Sunday stood at 12 per cent, with the Malwa region showing increase cases in the last seven-10 days.

With L3 occupancy 90 per cent and in some cases 100 per cent, the situation was grim, he said, adding that CFR was close to two per cent and higher (at 2.7 per cent) in rural areas.

Home deaths currently were also at two per cent. The worrying factor was that 17 per cent of the all deaths had no co-morbid conditions, he said.

With no clarity still on whether mutation was responsible for the current spread, he also underlined the importance of increasing L3 bed capacity.

Medical Education Secretary D.K. Tewari disclosed that from 343 in the first week of April, ICU bed capacity had increased to 770 and would be further enhanced to 900 by the end of the week.

To augment manpower, 700 MBBS final year students, 90 BDS final year students and 70 Senior Residents would be recruited immediately, while 86 nurses will also join in the next one week, he said, adding that a total of 473 new recruitments will be made this month.

ABN AMRO Selects Infosys as One of the Strategic Partners to...