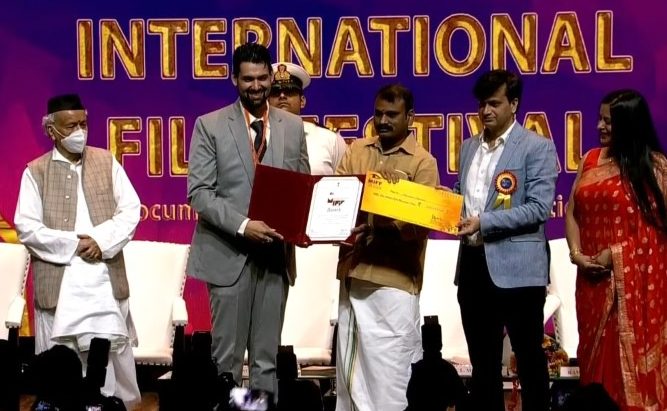 Ojaswwee has more than 80 films to his credit, including internationally acclaimed films Zubaan, The Last Date, Badalti Soch, Chaurassi, Scars – That Remain After 100 Years of Jallianwala Bagh Massacre, Silver Lining – The Journey of Rashpal Singh, Kites Beyond Boundaries, Art Finds Its Way, Sarbat Da Bhala and One Beat amongst others.
Elated, Ojaswwee Sharma shared, “It’s a huge recognition and I am thankful to Films Division, Govt. Of India for such a successful festival. Admitted got the recognition and so much love from audience is heartening. Filmmakers from various countries, students, and audience from diverse background came and shared on how the film impacted and influenced them, which is the true win for our film and Dhananjay Didi who has continuously been working towards raising awareness and bringing the Trans and entire LGBTQIA+ community in main fold and getting them respectful living.”
Dhananjay shared, “Today I feel my struggle of 20 years has finally paid off. The film getting so much love, attention and the Best Documentary award at highly prestigious MIFF is matter of pride. Ojaswee Sharma has done true justice to the struggle of my life. Admitted got rousing response at the big screen event well attended by filmmakers and film buffs from across the world. That’s really a great thrust for my cause which is education and upliftment of transgender community.”
‘Admitted’ is a biographical docudrama on the inspiring life of Mx. Dhananjay Chauhan – the first transgender student of Panjab University, Chandigarh. The national jury made a special note of the film’s forceful and brave lead character, and how the subject has been dealt by the make.  The jury was chaired by national award-winning filmmaker Sanjit Narwekar. The other members were Bangladesh filmmaker Tareq Ahmed, theatre artiste Jayasree Bhattacharya, Sri Lankan journalist and film critic Ashley Ratnavibhushana and film editor Subhash Sehgal.
The 17th Mumbai International Film Festival, first edition post-pandemic, came to a close at Nehru Centre, Mumbai with a grand closing ceremony in the presence of Chief Guest and Governor of Maharashtra, Bhagat Singh Koshyari. This edition had many firsts including being the first edition to be on hybrid mode. The festival witnessed an overall footfall of 9000 till date with approximately 5000 film lovers registered as delegates, including 1400 students.
The seven-day festival, organised by Films Divisions, saw a line-up featuring 400 films from across the world, out of which 102 titles were screened under the Competition Category — 35 in international competition and 67 in national competition. Eighteen documentary films from Australia, Canada, Germany, Ireland, Italy, Netherlands, Panama, South Korea, UK and India were in the International Competition section of MIFF 2022.
“Many films are quite inspirational; we should try to express what is inside of us and inside the society,” Chief Guest and Governor of Maharashtra, Bhagat Singh Koshyari, said in his address. “The idea behind such festivals is to recognize the talented ones – Directors, Producers, Artistes,” he noted.
Eminent Filmmaker and Guest of Honour, Shyam Benegal appreciated the non-feature filmmakers saying that they are self-motivated to make films that usually don’t have audience unlike main stream films.  “When you make a documentary or a short film you don’t have an ensured audience unlike a feature film; you make a short film because you are totally self-motivated; the inspiration to make the film has to come from within. This is the most wonderful part of this evening because these film makers are clearly motivated to make their films. That is something pristine about it, which I think is what film is all about,” he added.
The MIFF 2022 award for Admitted carries a silver conch and cash prize of Rs 5 lakh to be divided half and half between the director and producer. Ojaswwee Sharma shared that the cash prize would be shared with Dhananjay and his team at Pinaka Mediaworks whose enthusiastic and technically sound team helped the film get the recognition.
This is Admitted’s 6 award. Before this the documentary has 15 Official Selections to its credit.
The event was live streamed on Doordarshan National. Watch here:
https://youtu.be/O17r42EMccg
Also Read :   Telangana State Inter Supply Result 2019 released on bie.telangana.gov.in

PG Institute of Medical Education & Research Chandigarh in the final...