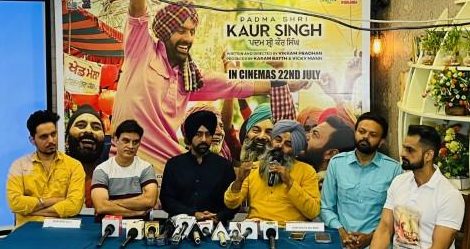 The trailer launch of the long-awaited Punjabi film ” Padma Shri Kaur Singh ” by Karam Batth and Slay Records  took place at Press Club Chandigarh today. The film is all set to hit the big screens on 22  nd July 2022, worldwide.

The film ‘Padma Shri Kaur Singh ‘ is a  tale of a forgotten Superhero.  Kaur Singh , brought Laurels to the country by Clinching several  gold medals worldwide in boxing championships and winning various Accolades for his Selfless Service in the Army to becoming the only few boxers to fight against legendary Muhammad Ali and give him a tough  fight.

But the one time champion today is not even remembered by his people, for all the glory he brought to the country. Despite being national champion , he was not given the desired support, when financial crises struck.
He was set aside by the government to claim the prize money promised to him, ~a story that awaited 37 years to unfold. It brings forth the inhuman aspect of the rude system he gets embroiled into. The movie is based on real-life instances and family drama that promises to serve entertainment packed with strong human emotions.
Also Read :   NZIEA Enters 60th Years:Hoisted Association Flag

The film stars Karam Batth in the Main Lead Role as Padma Shri Kaur Singh, along with an army of Talented Actors like Prabh Grewal, Baninder Bunny,  Raj Kakra, Malkeet Rauni, Sukhi Chahal, Gurpreet Kaur Bhangu and Seema Kaushal.  The movie is written and directed by Vikram Pradhan, and produced by Karam Batth and Vicky Mann.

Sharing his views, Actor & Producer,  Karam Batth said, “The movie has a very different storyline, with a different character. The movie is based upon a real-life story and gives one a strong message, and I am sure the audience will resonate with our efforts and attempt to tell the story. I am hoping that my fans will like my movie,  give me a thumbs-up, and help me garner the same love and support that they have bestowed upon me in the past.  Lastly, I would like to thank the entire cast and crew of the movie for being supportive and cooperative from the very beginning and till the last day.”

Ali Asgar Disguises as an Adivasi Woman in ‘Trideviyaan’

The DESI DUDE Is Back With A Bang