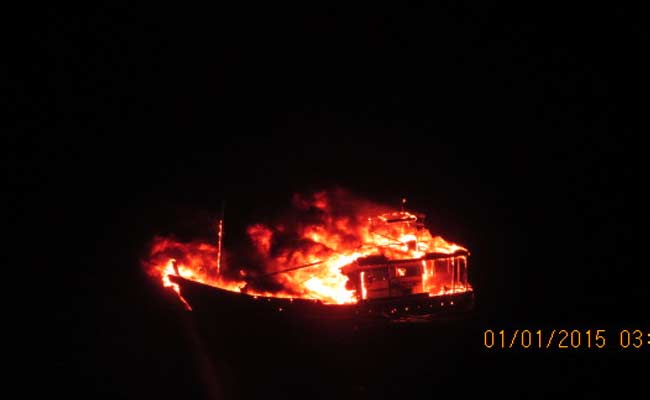 NewZNew (New Delhi) : A boat, reportedly from Pakistan, blew itself up off the Gujarat coast on New Year’s Eve. There were four people on the boat. So far, no survivors have been found.

The fishing vessel was deemed suspicious and then intercepted and chased by the Coast Guard for nearly an hour off the coast of Porbandar. After the Coast Guard fired at the boat to warn it to stop, the vessel blew up. In 26/11, a Pakistani boat sailed into Mumbai with 10 terrorists on board who then split into pairs and struck the city’s landmarks; 166

people were killed in India’s worst-ever terror attack. On New Year’s Eve, intelligence agencies had inputs that a boat had sailed from near Karachi to carry out what sources described as “an illicit transaction” in the Arabian Sea, about 350 kms south west of Porbandar in Gujarat. A midnight operation was launched using ships and a Dornier aircraft to locate the fishing boat. After a three-hour search, the unlit boat was located, and a Coast Guard ship that was patrolling the area was diverted. The Coast Guard fired warning shots at the boat, which then sped up and tried to escape. After a one-hour chase, the men on board who had gone below deck set fire to the vessel. A huge explosion and flames were seen.

Neither the boat nor any its crew members have so far been recovered.