Patients helpless in Delhi amid rising Covid cases: Amid devastating second wave of Covid-19 in the country including the national capital, the patients are increasingly feeling helpless as hospitals are struggling to properly handle the influx of patients. 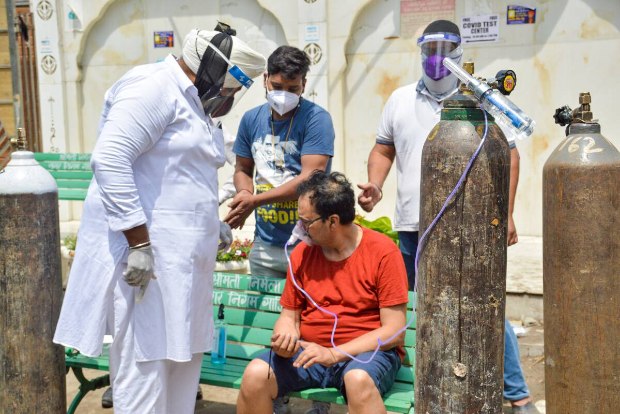 In Delhi, many patients and their relatives have been seen outside the hospitals waiting anxiously, and trying to approach the medical staff inside, only to be denied entry by the security personnel at the gate.

A Delhi resident who was seen accompanying a patient outside the LNJP Hospital, told Media: “The patient is not being admitted. We were told to talk to the CMO of the hospital… also, someone told us that the medical director has refused (admission to patients).”

He is not the only one who was seen requesting the security personnel to let him step inside.

Commenting on this situation, long-queues of infected patients, and their lengthy waiting time outside, LNJP Hospital Medical Director Suresh Kumar on Friday said the medical oxygen demand increased due to insufficient supply due to which “we are sending patients standing outside to other hospitals”.

“We held a meeting on the same… we are left with just 8 hours of oxygen supply, and the hospital beds are also full,” he said.

On being asked if the Delhi government officials have been apprised of the problems they are facing, Kumar said the government has been informed.

Meanwhile, patients continued to fight for their life outside the hospital.

Amit Sharma, who had brought a patient in a serious condition, told IANS: “… went to around 15 hospitals… everywhere, admission has been denied.”

Another family member who came with Amit, said: “A lot of helpline numbers have been put up but no response is being received.”

Security personnel deployed outside the hospital have admitted that they have been asked to stop patients from entering inside by the the medical director.

Commenting on this, some doctors of the hospital asserted that due to shortage of oxygen, the medical director has refused to admit the patients.

Understanding the Nuts and Bolts of Web Application Architecture

“Honii B” a Unique Fashion brand launched at Elante