PSEB 10th 12th Revaluation Results 2019 Declared, download at pseb.ac.in: The Punjab School Education Board (PSEB) has recently declared the results of Class 10 and Class 12 revaluation examination 2019. The result has been announced on the official website. 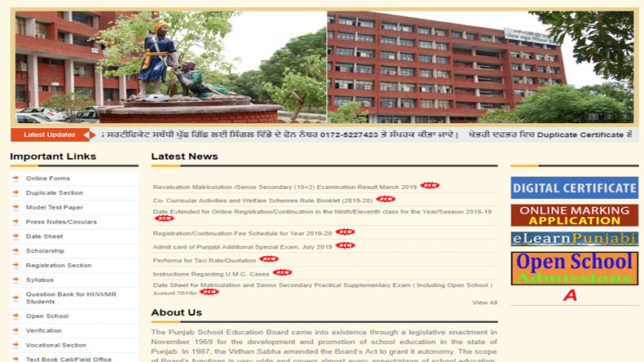 All the candidates who have appeared for the Class 10 (matriculation) as well as Class 12 (Higher Secondary) exams and were eagerly waiting for the result to get released, can now check and download their scores on the official website, the link for which is pseb.ac.in.

The Punjab Board conducted the examination for Class 12 board from March 1 to March 29, 2019. On 11th May 2019, the PSEB 12th Result 2019 was announced. This year, about the total number of 3 lakh students who appeared for the 12th board examinations in Punjab as well as overall they secured a pass percentage of 85.80 percent.

This year, from the regular stream there was a total of 2,69,228 students appeared for the examination, out of which 2,32,639 students successfully cleared the exam with 86.41 percent. Three of the students have scored 445/450 and secure 98.89 percent in PSEB class 12th examination.

Here is the list of websites through which you can check your Punjab PSEB Class 10, 12 Revaluation Results 2019, and these are as follows:

Here are some simple steps in order to check and download PSEB Class 10, Class 12 Revaluation Results 2019.

On the home page, click on the result link

After clicking that link, you will be directed to third party result website where you have to fill your credentials in order to log in.

Results will be displayed on the screen

Check and Download your result and can also take a print out of the same for future reference.

Punjab School Education Board (PSEB) is a school board based in Mohali, Chandigarh, India which was established in the year 1969. The Board was founded under a legislative act of the Government of Punjab to administer.

The board came in existence in order to conduct standardized examinations in public schools in the Punjab state. Also, in addition, it was also founded to conduct the administration of scholarships, as well as publishing of textbooks.

In the year 1987, the Vidhan Sabha revised the Board’s Act to grant it self-sufficiency. The Board has its headquarters located in SAS Nagar (Mohali), near Chandigarh.

“Jazba” presented by Aashray on the occasion of Children’s day