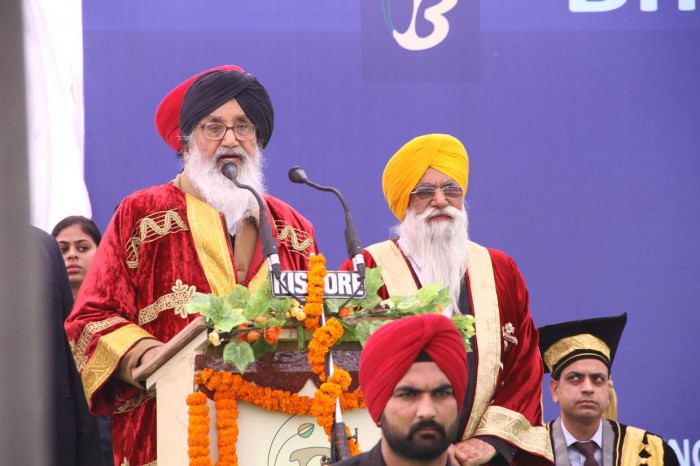 NewZNew (Ludhiana/Chandigarh) : Punjab Chief Minister Mr Parkash Singh Badal today said that the SAD-BJP alliance government was committed to revitalize the complete education system of the state in coming years. He said that the state government has given due attention on development of education sector in the state which can be gauged from the fact that Punjab has now jumped to the first position among big states, from 14th position in 2012-13.

Addressing the gathering during the convocation of Bhutta Group of Colleges at Village Bhutta (District Ludhiana) today, the Chief Minister said that complete transformation of the education system in the state was on their top priority for which stupendous efforts were being made by the state government.

Mr Badal said that they were aware about the need of quality education in today’s competitive age when owing to the modern techniques of communication whole of the world has become a Global village. He said that keeping in view the need to impart quality and modern education to the students of the state their government has kept the education sector on its top priority.

The Chief Minister further said that the state government was already working in the direction of complete overhaul of the Primary, Secondary and Higher education along with the Technical education in the state.

Mr Jagdish Singh Garcha, Former Technical Education Minister and Member Governing Council of Bhutta Group of Colleges informed that during the annual convocation of Bhutta Group of Colleges, more than 900 students of Engineering, Education, Management and Diploma were conferred degrees. The students were awarded degrees of different courses such as B.Tech (CSE, ECE,EE,ME,IT) BBA, MBA, B.Sc (IT), BCA, B.Ed and Diploma in CSE,ECE,EE,AE,CE,ME.

Also Read :   Microsoft brightens this Diwali with cash back offers on Lumia range !

Padam Shri Mr Jagjit Singh Hara, eminent agriculturalist was the guest of honour and was honoured for extra ordinary contribution to development of Punjab.