The first ever Punjabi-Science fiction, “Raduaa” will hit the theaters on May 11th, 2018. The official releasing date of the movie was announced on 8th May at Chandigarh. The movie stars renowned Punjabi actors’ like- Nav Bajwa ,Satinder Satt who were all present at the Occasion along with the director Anup Kumar. 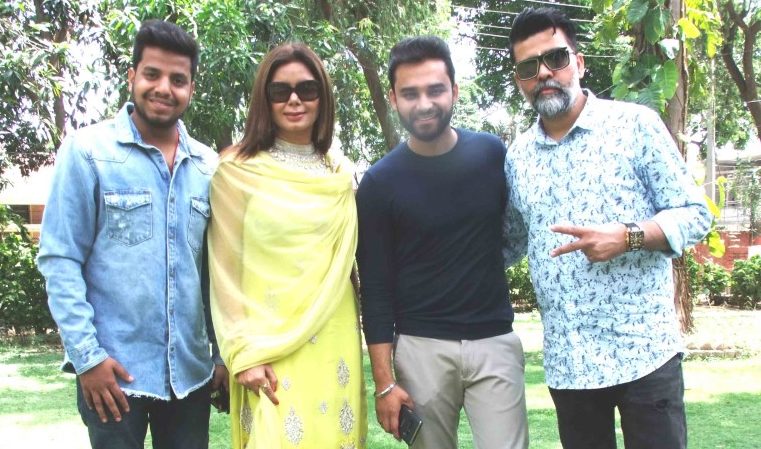 The interesting and unique storyline of the movie has made everyone pretty excited and the actors of the movie vouched for the same.

Produced under the banner of Anteros Entertainment, Nav bajwa films and AK Productions of Anup Kumar, the movie introduces a new genre to Pollywood. Alongside Anushk Naredi (22) perhaps the youngest producer ever, the movie is also produced by Nav Bajwa, Big Bat Films and  Anup Kumar.

The movie is based on Stephen Hawkins- Time and Travel Theory and is the first ever Science-Fiction to be released in Pollywood. The story revolves around the lives of four characters and their journey back in time.  They find a radio which they used to travel back in time from 2018 to 1955 to help their village by using the technical knowledge of 2018.

Nav Bajwa, the director, producer and actor of the movie says, “With this attempt we have tried to uplift the standard of Punjabi Cinema by introducing a new genre to it. This new-attempt would be well-accepted by the audience especially kids who would enjoy the storyline very much.”

Nav believes hat the movie is not esoteric to any particular age-group and will be liked by all. In fact, the unique storyline is already doing rounds among the audience which seems pretty excited for the release. To add to the excitement, is the amazing music of the movie which includes a remake of super-hit song, ‘Sonio Narazgi Tan Nahi’ sung really well by Stylish Singh, nephew of late Soni Pabla, the original singer of the song.

Talking about the responses the movie is receiving Nav shared, “The trailer which was released last month has got us great responses. People of Punjab as well as abroad have liked the concept quite well and are awaiting the release. We hope to receive the same responses post- release too”

Music Director Anup Kumar talked of the film-making process and how they have tried to recreate the post-Independence era in the movie. Giving more details of it, he says, “The movie has two songs which take you back to the old days. The plot has been created accordingly to give the true feels of Post-independence time.”

The plot reveals four characters who share an interesting and funny bond with each other. The situations created are naturally funny and adds to humor portions of the movie.

Sattinder Satti also spoke in high spirits for the movie, “I have always liked experimenting with new ideas and doing something different and this is where it has got me. When Nav shared the script with me, it clicked me instantly and I knew I have to do it.”

For Producer, Anushk Naredi, it is his first attempt in Pollywood. Before that he has produced Bollywood movie, Sarkar 3. Sharing his first experience in Punjabi Industry, he said, “He really liked working with the entire cast and this was an enjoyable experience for him. People of Punjab are very welcoming and working here made him feel at home”

The storyline seemed quite promising and hopefully it will hit the theaters with a bang.

Facebook data of 61 lakh Indians among over 53cr users leaked