Renault Kwid Crosses 4,00,000 Sales Milestone Celebrates With ‘Mileage Rally’ in Chandigarh: The Renault KWID has recently crossed the groundbreaking landmark of 4-lakh sales milestone in India and continues to be a major disruptor in India’s mini-car segment. 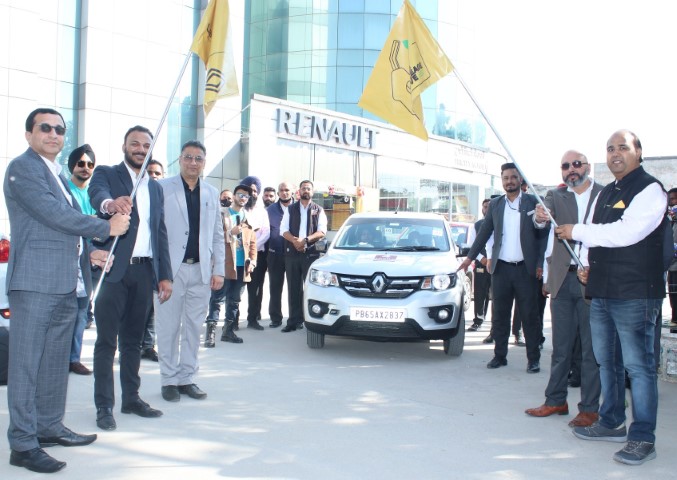 Renault celebrated this milestone with a special event in Chandigarh – ‘Renault KWID Mileage Rally’ organized for all KWID owners. This rally was flagged off from Renault Mohali Dealership, covering a total distance of more than 50 kms.

The rally presented a platform for existing customers to drive their KWID across Chandigarh with the objective of getting the maximum mileage. The event witnessed an overwhelming response from customers’, with more than 72 families participating and revving with enthusiasm and delight.

The rally reported an outstanding average mileage of 34 Kmpl. Once again, KWID proved that together with outstanding design and innovation, it offers great mileage, enabling an unmatched value proposition.

The Renault KWID is designed and developed specifically for the Indian buyers, keeping in mind global standards of quality & performance. It strongly resonates with the ideology of the ‘Make in India’ program, which advocates making globally competent products for India and the world by co-opting Indian expertise and skill.

Available in 9 trims, including RXE, RXL, RXT and Climber variants in both 0.8L and 1.0L SCe powertrains with Manual and AMT Options, Renault KWID has been instrumental in the growth of the Renault brand across the country. Renault KWID’s SUV-inspired design, first-in-class 20.32 cm touchscreen MediaNav evolution with Android Auto and Apple Car Play, and the floor console-mounted AMT dial come together to make driving effortless.

As part of the ongoing 10th Anniversary celebrations, Renault has launched the all-new KWID MY21 recently. The MY21 range complies with all the safety regulations applicable in India, and comes equipped with dual front Airbags as a standard feature across all the variants.

Accentuating the attractiveness of the car, the MY21 Climber Edition features the Dual Tone Exterior in White and Black combination along with the Electric ORVM and Day and Night IRVM. The Front driver side pyrotech & pretensioner further elevates the safety quotient of the vehicle.

Renault has also announced special offers including 10% discount on Spare Parts & Accessories and 20% discount on Labour Charges for all the KWID customers.

Renault India Pvt. Ltd. is a fully owned subsidiary of Renault S.A.S. France. Renault India cars are manufactured in the manufacturing facility located in Oragadam, Chennai, with a capacity of 480,000 units per annum. Renault India also has a widespread presence of more than 500 sales and 530 service touchpoints, which include 250+ Workshop On Wheels locations across the country, with benchmark sales and service quality.

Renault India’s product line up and services have seen strong recognition among customers and industry experts alike, winning more than 60 titles, making Renault India one of the most awarded automotive brands in a single year in India.