“With KWID, Renault continues to pursue its strategy of accessible mobility for all to step up its international growth. Using a new Renault-Nissan Alliance platform and following the trail blazed by the Duster, the KWID will enable Renault to continue its expansion and address the needs of customers who want a vehicle that is stylish, robust and easy to use” shared Carlos Ghosn, Chairman and CEO, Groupe Renault, about the new launch by Renault. 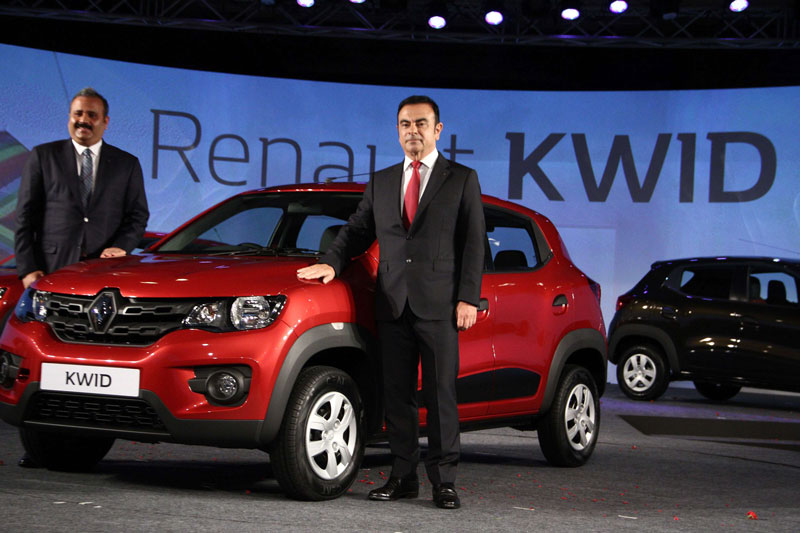 KWID is a new and unique offering in the compact car segment, a vehicle with a dynamic profile and SUV look tailored to its dimensions. KWID is an attractive and modern car, with a spacious, comfortable interior that meets the everyday needs of all the family.

KWID overturns established A-segment design cues thanks to a robust, stylish exterior plus a modern, welcoming interior equipped with unprecedented features for its segment.

With its short front and rear overhangs and high groundclearance (180 mm), KWID conveys an immediate impression of strength and reliability. At 3.68 meters long and 1.58 meters wide, KWID is ideally for zipping about in urban traffic, while its high-up driving position provides greater visibility for more relaxed journeys.

The KWID’s upright front end and short front and rear overhangs provide owners with the look associated with SUVs.

The bold, structured grille design highlights the logo and further emphasises the model’s SUV credentials, while the head lights incorporate the brand’s new lighting signature including a ‘C’-shaped chrome trim.

The slightly sculpted sides provide a fluid, dynamic touch, with the rectangular forms of the black wheel arches providing another pointer to the KWID’s SUV breeding, as well as additional protection. The lower door decor underlines the KWID’s robust character. The steeply-raked, forward-positioned windscreen lends a sense of movement and fluidity to the high waistline which rises slightly at the rear.

The large windows ensure good visibility for the driver and play a big part in travelling comfort.

At the rear, the lower part of the bumper comes with a black trim, another SUV cue. The body-coloured tailgate spoiler adds to the car’s dynamic stance.

The KWID’s interior carries over the same confidence-inspiring styling as the exterior. The horizontal, uncluttered lines of the dashboard convey an impression of width and feature the cues associated with higher-end segments. The dashboard also harmoniously houses the centrally-positioned multimedia system.

The piano black centre console comes with a chrome-surround and houses the Media-Nav multimedia/navigation system which comes with a seven-inch (18 cm) display, an unprecedented size for the segment. The KWID’s connected interior includes technologies that not only meet drivers’ needs but also make driving simpler. The user-friendly Media-Nav system includes the radio and Bluetooth technology for hands-free telephony which contributes to safer driving. The KWID has a very spacious boot for a best-in-class load capacity.

“We have a very clear focus on establishing ourselves in the growing and volume segments of the Indian automobile industry. Alongside our aggressive product introduction plans, we are also determined to offer customers the best experience with our brand and will continue to introduce several initiatives towards achieving that, encompassing our strategy of accessible mobility,” shared Sumit Sawhney, Country CEO and Managing Director, Renault India Operations.

With KWID, Renault goes a step further with the launch of an attractive, innovative and affordable vehicle in the small car segment, selling at a price of between 3 and 4 lakhs in India.

KWID will be launched in India in the second half of 2015.

Renault KWID will be the first Renault-Nissan Alliance model to use the CMF-A platform.

Thanks to this platform-based approach, the Alliance is able to go further in the developing an international, flexible product offering based on component sharing and high-performance architecture.

Like all the Alliance platforms, CMF-A is extremely flexible. The exterior styling and the power train can be varied significantly in order to match the specific requirements and preferences of customers, in India and on other international markets.

“CMF-A opens new horizons in terms of our ability to satisfy and even exceed the expectations of customers in countries where demand is currently highest, particularly those customers buying a vehicle for the first time. These influential consumers do not want a car that was initially designed for mature markets before becoming outdated. They aspire – and rightly so – to a modern, robust, elegant car at a price that represents a mini-revolution for such a remarkable vehicle,” shared Arnaud Deboeuf, Alliance Senior Vice President, Renault-Nissan BV and Alliance CEO Office.

Renault went further down the road in terms of its organisation, cost management and delivery times to design and manufacture the KWID, a model with a global calling.

The process made use of resources and staff in France, Japan, Korea and India.

For example, vehicle testing took advantage of the Alliance‘s strengths by using different establishments to put the KWID through its paces: the body and chassis were tested in Japan, body equipment was evaluated in Korea and endurance tests were carried out in France, while India was the backdrop for overall and assembly testing.

The vehicle was developed close to its market. Supplier sourcing in India has been raised to 98%, including 60% in the Chennai region.

The project management team put in place the conditions necessary to develop the KWID, with the entire team working out of a single location so that the teams tasked with designing, developing and building the car could work together more effectively.

Methodologies throughout were harnessed to ensure the car would be in phase with market needs and meet pricing targets.

India – a key market for Renault

India is one of Renault’s priority markets, along with Russia, Brazil and China. With a staff of more than 12,000, the Group has a strong local base there enabling it to adapt more effectively to local realities and requirements.

KWID is an illustration of Renault’s ability to develop vehicles that make everyday life easier by meeting the needs of customers looking for a stylish vehicle that is robust and easy to drive. Through its design and innovative features, KWID will play an essential role in Renault’s ongoing expansion in India.

Renault has placed the emphasis on local presence and local content by setting up a first operational base for the Alliance, with the Chennai production plant and the Renault-Nissan engineering and purchasing centre, Technical Business Centre India (RNTBCI). The design centres in Mumbai and Chennai, and logistics centres in Pune and Chennai reflect the brand’s ambition to establish a strong long-term presence in this country. The Mumbai design centre was the first to be opened in India by a foreign vehicle manufacturer in 2007.