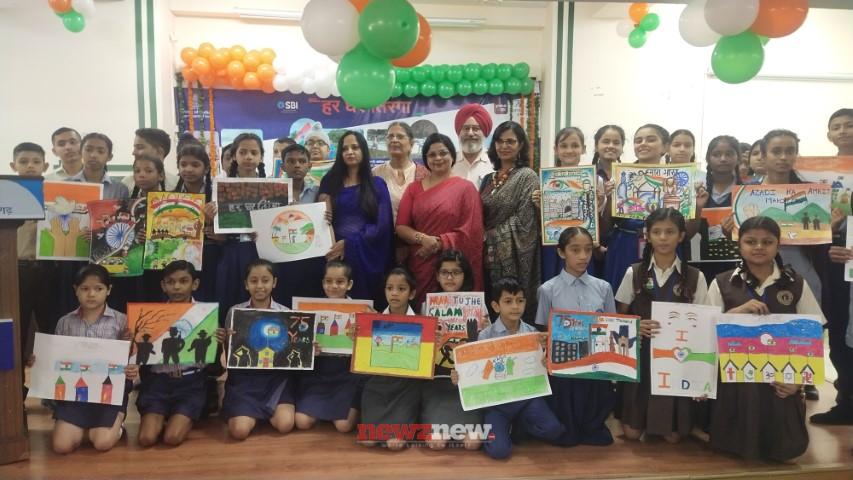 The winners of the drawing competition were – Abhilasha (junior group), and Aaina (senior group), both from Ankur Public School.
The Inaugural lamp lighting was done by Vinod Jaiswal, Chief General Manager (CGM), State Bank of India, Chandigarh Circle.
More than 200 students from different schools in Chandigarh participated in the event. The winners were given trophies and participation certificates by Ms Priti Jaiswal, President, SBI Ladies Club, Chandigarh.
The SBI drawing competition titled as ‘Har Ghar Tiranga’, celebrating colours of happiness and prosperity of 75th Azadi ka Amrit Mahotsav, in which students from Chandigarh participated in two categories – junior group (6th to 8th), and senior group (9th to 12th).
Vinod Jaiswal, CGM, SBI Chandigarh Circle, said, “The drawing competition was based on the themes of Har Ghar Tiranga, Maa Tujhe Salaam, and Mera Bharat. The bank provided drawing sheets and colours to all the participants. Trophies were given to the first prize winner, 1st runner up 2nd runner up. Besides this, 5 consolation prizes in both categories were also given, as decided by an  independent jury.”
Also Read :   Renault raises the bar with the New Generation Duster

626 teachers send their entries for state level write up competition