NewZNew (Chandigarh) : Pained by the defamation of Punjab on drugs issue, Harp Farmer, the well-known artist of Punjab started a drive against this negative agenda. He posted his video encouraging Punjabis to come forward to support the mission. The video garnered more than 1.5 million organic views on Facebook within one week. Prominent celebrities DalerMehendi and Ankur Singh Patar supported his mission on social media with their selfie videos. Ankur Patar is one of the three illustrators in the world, Adobe is making documentary on. Over 1000 videos have already been posted by youth of Punjab on various social media platforms with the hasthtag #StopDefamingPunjab.

Finding Harp’s idea in sync with their campaign “From Shame to Pride”, Lipi Foundation joined hands with Harp.

Dr. Mahek Singh, Prinicipal Consultant, Lipi Foundation says, “While I was working with CAPART, MoRD and Centre of Excellence, Punjab University as a research associate, I found that most of the issues in the social sector come from stereotyping. In case of Punjab, the negative stereotyping is leading to unrest. As a result the region is defamed and looked down upon.Through our campaign “From Shame to Pride” we at Lipi foundation intend to bring the unbiased and positive side of the region to the forefront. 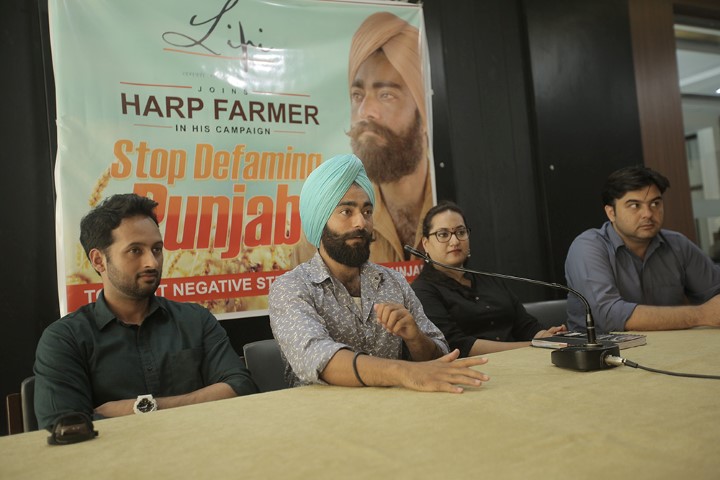 The startling news of drug abuse in Punjab have been making rounds in the country bringing a bad name to the state, which has prompted Harp Farmer to start an online campaign, which is gaining popularity. He launched this campaign through his page “Stop Defaming Punjab” (https://www.facebook.com/StopDefamingPunjab/).

Addressing media persons here, Harp stated, “I feel the pain when I travel abroad and people paint all the Punjabis in negative colours of being drug addicts. But these are not the true colors of Punjab. My mission is aimed at presenting the true colours of Punjab and clear myths regarding the drug abuse. “

“It’s a shame that some people are presenting a gory picture of Punjab for their selfish gains. Unfortunately they fail to understand that they are hampering the progress of the youth of Punjab. Drugs is a national problem and being a border state Punjab has been used as the doorway for drug trafficking but that doesn’t mean all Punjabis are the consumers of drugs”, he further added.

Lipi Foundation and Harp Farmer plan to do awareness campaign in different colleges and villages across Punjab, to educate the youth against the social evil of drug abuse.

Harpreet Singh is a multifaceted personality with a proven track in Photography, Filmmaking and acting. Widely famous as Harp Farmer from village Nadalon, District Hoshiarpur, Harpreet has been working with a sole motive of promoting Punjab and the spirit of Punjab for the last 5 years. He has held exhibitions in India and Australia under the banner “Colors of Panjaab” to showcase various facets of vibrant Punjab.  Harp believes that there is a lot in Punjab that is still untold and that the villages (Pind) of Punjab hold a lot of talent, which needs to reach the world.

Lipi Foundation is a social organization working in the space of Family Counselling and digital awareness and aims to construct better communications tools for common masses.

The social organization was already running a campaign called “From Shame to Pride” which aims at bettering communication in the social sector.

This newly formed association is certainly a good news for Punjab which was reeling under the attacks of sensational comments as a result of political vendetta in the region.