Suniel Shetty, led Bollywood Kings dazzle at the The Friendship Cup UAE 2022 promoted by Amin Pathan: “Sharjah is the mecca of cricket with being on top of glory in the Cricketing world during the 90s. With this tournament, the cricket fans revived their memory of the 90s when cricket was being introduced to the UAE and maximum ODIs have been held here. 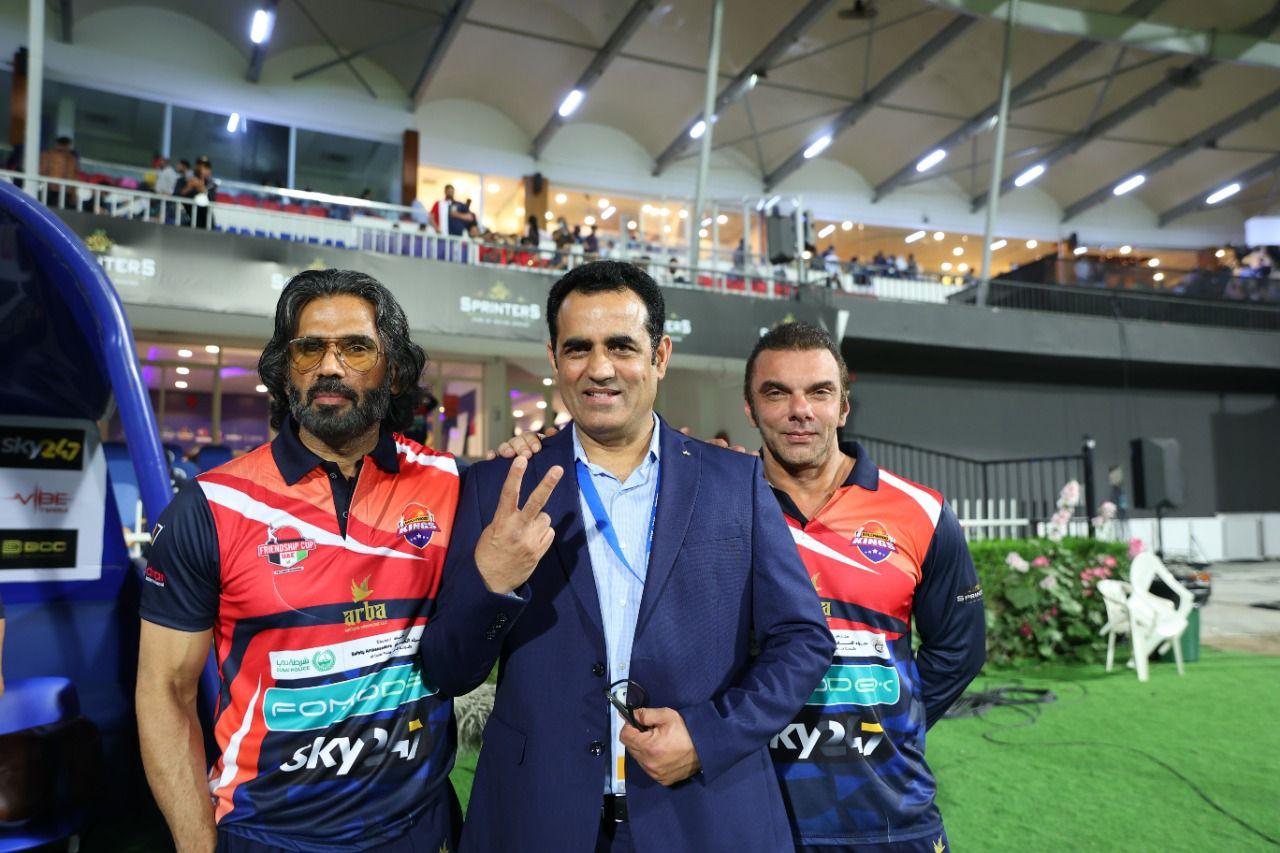 We are overwhelmed with the love showered on the Legends of the Cricketing world by the spectators in Sharjah,” announced Amin Pathan, the elated Chairman of the recently held three-day star-studded Friendship Cup – UAE 2022 that featured cricket legends from around the World including former Indian Cricket Captain Mohammad Azharuddin, Bollywood star Suniel Shetty, former Pakistani cricket sensation Imran Nazir and Sri Lankan star cricketer Ajantha Mendis.

The Friendship Cup – UAE 2022 has given a platform to the greats of the Cricket during the 80s and 90s and the spectators adored seeing their favorite legends taking the field again. Cricket lovers still harbor memories of Sharjah Cricket ground with the splendid performances of cricketing heroes who are now in their 40s and 50s like Mohammad Azharuddin, Ajay Sharma, Saba Karim, Narendra Hirwani, Rajesh Chouhan and Pakistan’s Mohammad Shaami, Yousuf Yohanna, Chamunda Vaz and Abdul Razak from Bangladesh who re-appeared after almost 2 decades including those who retired a couple of years ago, on the same ground where they created history. The spectators witnessed a tough competition and it conveyed a Universal message of Friendship and Brotherhood among the great cricketers across countries coming together to play for the firms time.

It was the Pakistan Legends that won the Friendship Cup–UAE Championship by beating World XI by 14 runs to lift the first Friendship Cup – UAE that successfully concluded at the Sharjah Cricket Stadium last week.

In the final match, Pakistan Legends piled up 133 for five in their stipulated 10 overs, contributed by Salman Butt (45 off 20 balls) and Mohammad Sami (36 off 10 balls). In response, World XI started off well aided by Phil Mustard’s 50 off 21 balls and Tillakratne Dilshan with 34 off 16 balls who looked dangerous after putting up a 78-run partnership. However Mohammad Irfan took the game out of World XI’s hands by bagging a few quick wickets and stopping them short of 8 runs.

Amin Pathan is the Vice Chairman of Rajasthan Cricket Association (RCA) and the Chief Promoter of Rajwada Cricket League (RCL) that is a such a big platform for budding cricketers with having completed its 6 editions, many of whom are selected for even the IPL tournaments. He has also initiated a Cricket League in Bahrain for the first time in that country’s sporting history. Cricket has always been the passion of this philanthropist and a top Politician from Rajasthan, Amin Pathan who was himself a promising pace bowler playing state level tournaments in Rajasthan during his college days.

Amin Pathan further mentioned, “The local crowds were just thrilled with even the Bollywood team participating as this is the first time in history that Bollywood cricketers played against International Test cricketers, the Indian, Pakistani and World Legends on Sharjah’s historical ground. The spectators consisted mainly Afghanis, Bangladeshi, Pakistani and Indians cricket lovers for whom UAE is like a second home for them.