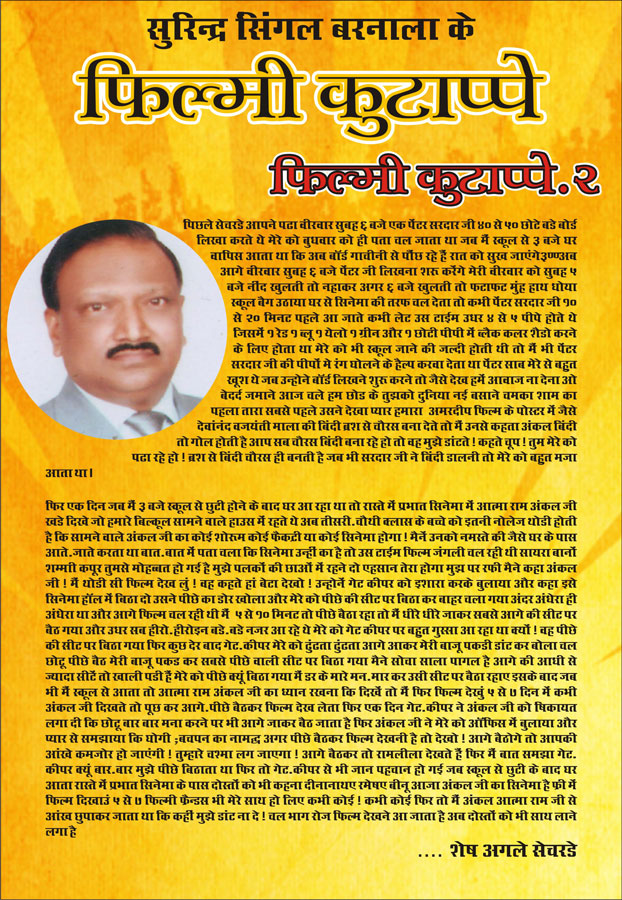 [toggle title=”Filmy Kutappe – 2 in English”]Last saturday you have read,painter sardar ji start writing boards on Thursday morning at 3 am and i get noticed on Wednesday, when i came back from school and he was cleaning the board with gachini. I got up early in the morning and started moving to the cinema theatre and sometime sardar ji came late and some time came early. He has 5-6 bottles of colors and he used that bottles of colors to paint the board. I sometime help him beacuse i had enough time for school. He was very happy when i helped him. when he satrted painted the board he sung Hamein aawaz na dena o bedard zamane aaj chale hum chod ke tujko dunia nayi bsaane shaam ka pehla tara sabse pehle usne dekha pyar hamara. When he make Bindi of Vijayanti Mala’s picture in Amardeep film with Devanand he made Bindi sqaure but i used to interfere that Bindi is always in circle but then he shouted on me and said that Bindi was always made square with brush. When One day i was coming back from school i was Atma Ram ji Uncle who was living in front of our house was standing in Prabhat Cinema, a Kid didn’t know that why he was standing there as he had his house or shop near by Cinema. I wished him as usual but later i found that he was the owner of Prabhat Cinema. At that time Shammi Kapoor and Saira Bano’s Film Jungali was running in the Cinema “Mujhe Tumse Mohabbat Ho Gayi hai Mujhe Palko ki Chhaon Mein Rehne Do Ehsaan Tera Hoga Mujh Par” I asked Uncle that please allow me to saw the Movie. He allowed me and make a mark to the gatekeeper and said sat him in the Cinema haal He opened the back door and sat me on the last seats and gone outside. There was dark inside and Film was running I sat for 5-10 minutes but then i moved to the front row and there i have seen Hero Heroins are too Big to aw. I was very angry on the gatekeeper that why he allowed me to sat at the end. I thought he was mad all the front row seats were vacante why he allowed me to sat at the end. He found me in the hall and taken back to the end row once again. This trend goes when i wanted to saw the movie and uncle allowed me to enter the cinema hall. One day Gatekeeper complained Uncle about me that i used to moved to the front row. Uncle called me and tell me that if you sat on front row then my eyes got effected front row was for Ramleela, then i understood why gatekeeper do that. After that gatekeep and i was good friends. and trend of wathching movie was little bit easy for me and i take some of my friends with me……. to be continued on next Saturday……[/toggle]