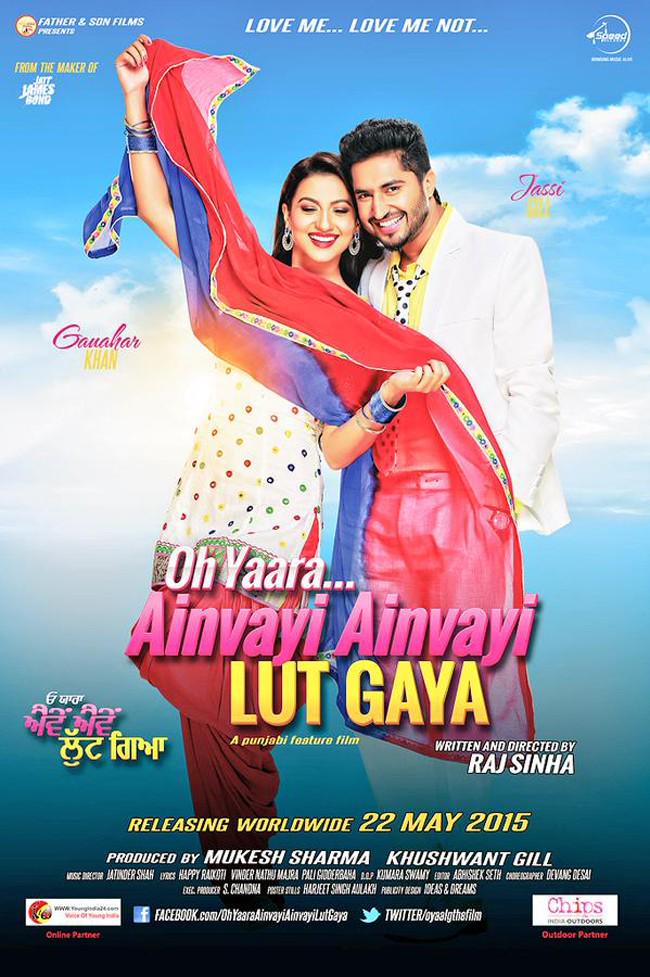 NewZNew (Chandigarh) : Just a few days back, shooting of this film was going on in town, and now, the trailer is ready. It is Punjabi film ‘Oh Yaara Ainvayi Ainvayi Lut Gaya’, the trailer of which was launched on Wednesday at city’s Elante Mall. This presentation of Father and Son Films stars singer-actor Jassi Gill and TV’s favorite girl and Big Boss winner Gauahar Khan who will be seen playing husband and wife. This romantic comedy has been produced by Mukesh Sharma and Khushwant Gill. Director of the film is Raj Sinha who was the creative director of the same production house’s last hit film ‘Jatt James Bond’. Raj is professionally a film editor and has been associating with Dharmesh Darshan. He also has written screenplays of a few Bollywood films.

Along with Jassi and Gauahar, B.N. Sharma, Karamjit Anmol and Rana Ranbir will also be seen in main characters. The film has been made in a light-hearted manner so that the families can enjoy together.

Producer Mukesh Sharma said that people these days do not have much time, so we focused on making a film where they can leave their worries outside the movie hall. The topic is about husband-wife’s love and war which is the story of every household. Every family member would be able to relate to this film laughingly.

Also Read :   Punjab is one of highest growth markets for DEN SNAPDEAL TV-SHOP

Producer further added that comedy is such a genre which could be called ‘evergreen’. No matter how weird people talk about such films but at the end of the day the audiences want to laugh out loud and welcome comedy films with open hearts. We hope our film makes a place for itself in audiences’ hearts as well as their homes.

Jassi Gill told that playing such character wasn’t much tough as we usually see love and conflict between a couple in our homes and families. I can undoubtedly say whichever couple will go to watch this film, would walk out with much more love for each other. Gauahar, while working in this film, enjoyed the Punjabi culture and hospitality. She said that professionalism in Punjabi cinema is no less than that in Mumbai but I could feel more love and attachment here which is also the topic of our film.