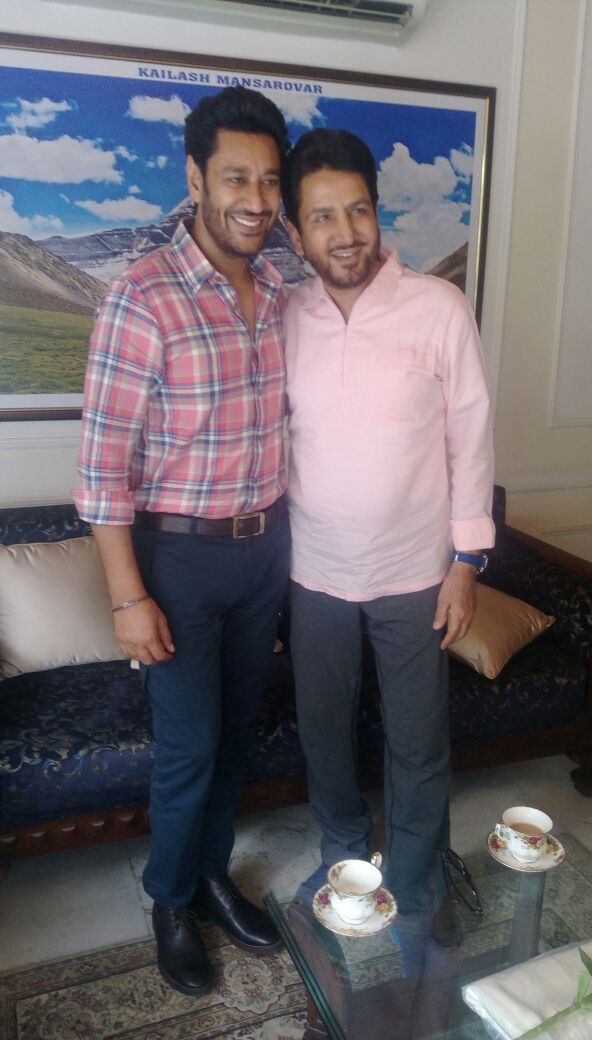 The 2 min 55 seconds Trailer is an audio – visual delight which gives one a feel of top-of-the-line post production values with its slick editing & great choice of scene shots; that whet a viewers’ appetite to see the full movie.  “The trailer became an instant hit with no other than Bollywood Director Mahesh Bhatt. He quietly whispered into the ear of our Director ‘I am surprised that Punjabi cinema is growing so much, just a look at the Trailer of ‘Saadey CM Saab’ makes me feel that the movie will be a blockbuster.’”, Said Harbhajan Mann, about the praise showered by Bhatt on the Trailer for its technical & creative post production values. Adds Sumeet Singh, “The film does carry out a scathing attack on corrupt & self-serving politicians of today, but in a very entertaining manner.”

The live Facebook launch of ‘Saadey CM Saab’s’ Trailer saw both the Manns going live with 1000’s of fans. Harbhajan had a chit chat with his followers & of course fans of ‘Saadey CM Saab’. They talked to each other about the movie. Gurpreet Ghuggi, who is playing an important role in the movie said, “I am very satisfied with my performance in the film. You will see me in a new Avatar where I will be doing action with comedy, I am sure this is going to be my finest Film ever.”

There is a lot of talk that’s doing the rounds in Pollywood circles about the potential of Harbhajan’s next film –‘Saadey CM Saab’ — a thriller comedy. “I am sure this film will showcase the acting prowess of Harbhajan, who is playing a negative role, like it’s never been seen before.” Said the Film’s Director Vipin Parashar.

‘Saadey CM Saab’ is the story of three friends who refrain from politics but however, due to a vicious circle of fate they fall into politics. Harbhajan Mann, Gurpreet Ghuggi, Rahul Singh and the stunningly beautiful Model-Actress Kashish Singh are the lead characters. South Superstar S.S. Rajamouli’s ‘Magadheera’ & Rajnikanth starrer ‘Lingaa’ fame Dev Singh Gill is in a Negative Role. Rahul Singh of Bollywood Industry is making his debut in Pollywood.

“All in all the film has all ingredients of doing well at the box office. Not only will it entertain but will also leave you with a feeling of patriotism, when you leave the movie hall.” Sums-up Harbhajan Mann.One thing is for sure, a look at the Trailer gives one a feeling, that the film will establish an enviable benchmark for Punjabi Cinema. The movie will release worldwide simultaneously in Punjabi and Hindi on May 27.

Today’s Youngsters only can fight battle against drugs says Justice A....

Everything You Need to Know Before Buying Your First Motorbike