NewZNew (Bathinda) : The Union Minister for Food Processing Industry, Government of India, Mrs Harsimrat Kaur Badal today said that under the leadership of Prime Minister Mr Narendra Modi, the notion of China and America as well as that of other nations about India have changed. She was in Bathinda today to inaugurate the ultra modern Suwidha Centre in District Administrative Complex that has been revamped at a cost of Rs 70 lacs. She said that Mr modi has given new dimensions to the international relations wherein the developing India was being viewed in a different paradigm and has made Indian diaspora proud. 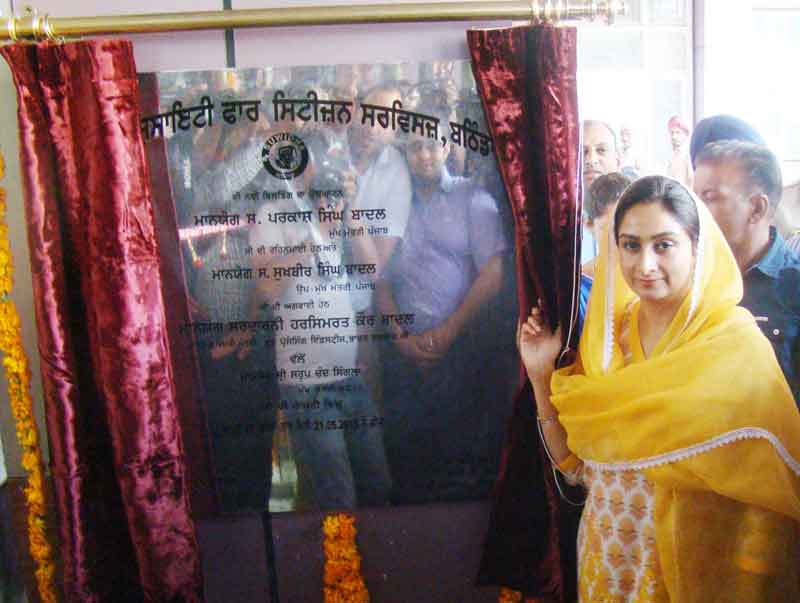 Union Minister Badal said that now a large amount of foreign investment is being seen in India. “During its regime, Congress did nothing except scams and their ministers worked on their own leaving Prime Minister aside. In last 10 years the country has been defamed in the name of scams. Shunning all these images away, Mr Modi has given a new identity to India,” she said. Union Minister added that Mr Modi was well aware of the problems of poor segment of society and hence has launched different insurance and  pension schemes, while the Congress leaders remained busy in posing with poor for photo-ops.

Union Minister added that Punjab government was making consistent efforts to provide all services under one roof. Under the leadership of Chief Minister Mr Parkash Singh Badal and the deputy CM Mr Sukhbir Badal ultra modern Suwidha Centers were being opened in rural and urban areas so that people get common services nearer home. She added that sewa kendras are also being set up to provide services under Unified Delivery Services Centers.

She added that the Suwidha Center at DAC Bathinda has been given ultra modern look and facilities at a cost of Rs 70 lacs and has been designed on pattern of ultra modern centers. Spread in 6500 square feet of area, the center would provide 41 services to thousands everyday wherein people can also check status of their applications filed. She added that to maintain transparency in the working of Suwidha Center, it has been fitted with glasses so that people are provided facilities right in front of them.

The Food Processing Minister said that Punjab government was constantly working for betterment of people of the state under which three mega parks have been given to areas of Fazilka, Phagwara and Ludhiana. Besides this premier health institute AIIMS and several projects of four laning and six laning have also been sanctioned. She added that the AIIMS will come up in 200 acres of land at cost of Rs 1600 cr. Besides this the NDA government has given Punjab several major projects and would continue doing so. Besides AIIMS, Punjab has been given IIM and PG Horticulture Research and Education Institute.