newznew (Chandigarh) : To clear the air about education scenario in USA post Donald Trump becoming President, a press conference was addressed by Mr. John Evans, a seasoned Expert of higher education in USA for the past 23 years. John is also Representative of Point Park University, Pittsburgh & West Virginia State University. During the press meet which was convened by Charms Education that guides students find the right course, college & in provision of consultancy services for turn-key student visas for different countries, details of Mega World Education Fairs(WEFS’) was also announced. 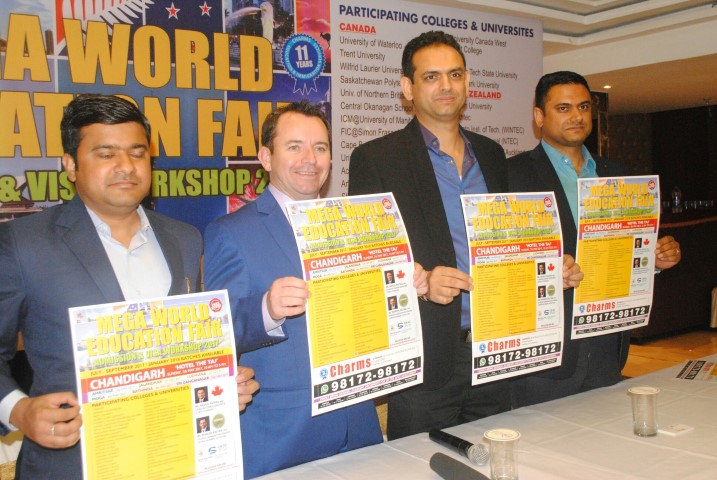 “Charms will be bringing Colleges & Universities from different countries on a single platform of WEFs’. Countries that have not been actively participating in Education Fairs are coming to Chandigarh & Punjab for the first time. These include USA, Singapore, Switzerland, Australia, New Zealand & Canada. On 4th May- the WEF will take place in Amritsar, 5th May in Jalandhar, May 6 will see WEF being held at Ludhiana, May 7 in Chandigarh, May 8 in Moga & Bathinda on May 9 and in Sri Ganganagar WEF will be held on May 10.” Said Rahul Paitka, MD, Charms Education.

Meanwhile, John Evans explained that during the past 12 months, there has been much anxiety in the Indian market relating to studying in the USA.  This John said has been fueled both by political change and media coverage. The expert added that however, according to a recent SEVIS( Student and Exchange Visitor Program) report, India remains a strong, growing provider of international students for the US market.  Some figures too were shared with media — now over 1.2 million students are studying in the USA, with over 200,000 from India. 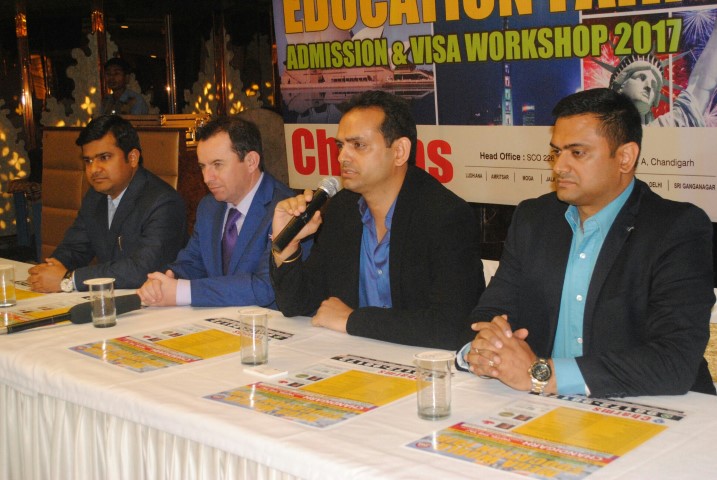 “The positive part is that F1 visa approvals during Q1 of 2017 from India are up by around 2% from the same period in 2016.   Many agents and universities are now reporting there are signs of improvement in consumer confidence and they expect application volume to increase in 2017.” Said John Evans.  “Large volumes of students still appreciate the high quality of education offered by US universities, along with the opportunities to access practical experience with major US companies via Curricula Practical Training and Optional Practical Training Programs.” Added John.

Nearly 40 top Government approved Colleges & Universities from different countries will take part in the WEFs’. “Germany’s Colleges & Universities are offering free education to foreign students. The Pre-condition is that one has to learn the German language & meeting academic requirements as per University. If one achieves B2 level in language then Bachelors’ programmes are free & in case one has proficiency level of C1 then he or she can pursue a Masters free of cost. The population of Germany is decreasing & Universities expect to have 30% less students by 2030. This has prompted the government there to take the free education route.” Explained Manish Paitka, CEO, Charms Education which has been designated to provide Student Visa Consultancy for German Colleges & Universities.

Speakers at the Press Meet informed that at the WEFs’ International Recruitment heads from Switzerland which is the World’s most sought after tourist destination will showcase innovative Hospitality programmes. Singapore will present itself as a pathway to countries like USA, Australia & Canada and that too at costs which are 1/3rd of academic costs in these countries. Canada will be represented by 21 Colleges & Universities. Australia will be represented too.

As Charms is a major recruiter for New Zealand Visas a good participation from New Zealand Colleges & Universities will be seen in the WEFs’. It is noteworthy that Mr. Manish Paitka , CEO, Charms Education is a licensed Immigration Adviser certified by New Zealand Government to provide information about Student & Immigration matters. As per New Zealand Government law any person giving advice in such matters must be licensed. What’s more, spouse visas for New Zealand are very popular in the region & it was announced that Mr. Manish Paitka will be providing free advisory services in this category.

New Punjabi Movie ‘SaddeAale’ is all set to hit theatres on...

“Trends Brand A Life Style Exhibition” A Luxury Show For...