Weekend binge-watch with Watcho’s Top 5 Comedy Series: Everyone needs a laugh from time to time, especially in times like these and a hilarious watch can uplift the mood and bring a smile. 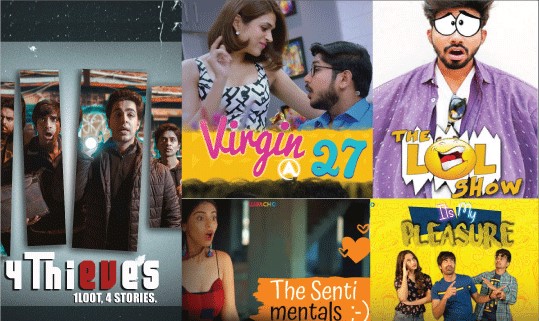 This weekend put aside all your worries and gloominess and switch on WATCHO to binge-watch chill-out comedies. Here are the top five comedy shows on WATCHO that will make your heart light and lift your mood on the weekend.

The top five comedy originals on Watcho will make you laugh:

Written and directed by Gautam Parvi and produced by Filmcurry, 4 Thieves delivers a thrilling dose of drama, comedy, intrigue, and jaw-on-the-floor moments.

The five-episode web series revolves around the lives of four college graduates who are on a mission to steal 125 paintings from an art gallery warehouse. As events take startling turns, things do not work out as planned leading to conflicts between the friends and they mess up the whole mission leading to a laughter riot from beginning to the end.

The new original comedy series ‘The SentiMentals’, is a hilarious combination of cross-connecting events that take place over time full of trial and error.

The LOL Show by Funk You

Bringing young and fresh comic talents to your screens to tickle your funny bone. A hilarious show 15 episodes show laced with pranks, gags, skits, and sketches will be a much-needed stress buster.

The story revolves around a boy whose many attempts to learn more about sex and get close to any woman end up in bad luck. Ever since his adolescent years, his attempts like – reading adult magazines end up getting caught with by his uncle.

During his final years of high school, he gets hold of adult CD that his grandmother accidentally sees and dies of a heart attack. While in college he makes a bold attempt of hitting on his professor and ends up embarking on himself. His friends and family know of his ill fate and often pull’s his leg with this which is a huge embarrassment for him.

He often gives into the peer pressure and takes drastic steps to shed his tag. He is shrouded in a feeling of worry and fear during his marriage as he fears his wife may also meet the same fate.

Conceptualized by Bhavya Attrey and produced by Filmycurry, the seven-episode drama series is a light-hearted attempt to look at the consequences of the situation when you want to pursue your dream startup.

The series revolves around the life of a young man named Raman who works for an MNC and is juggling between his work-life and desires to dive into the ‘start-up’ world with an unconventional business idea of ‘adult toys’ which challenges the convention of ‘acceptable and respectable’ business.