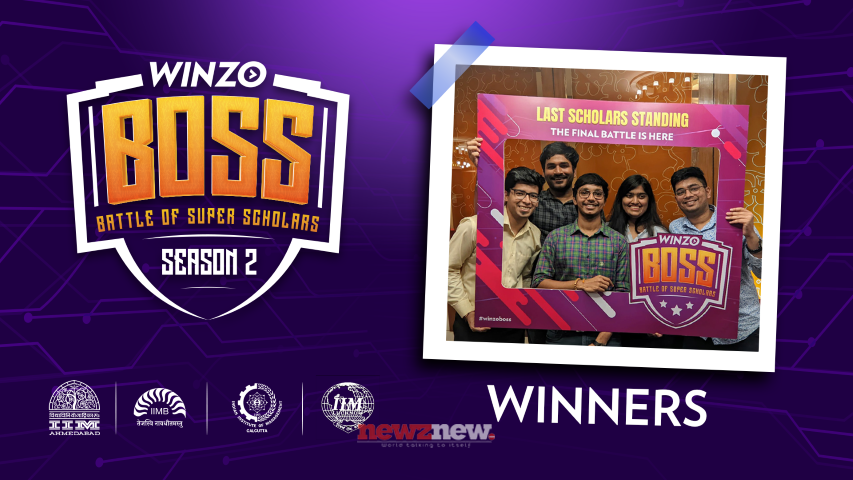 With the addition of two new top B-schools IIM Bangalore and IIM Lucknow along with IIM Ahmedabad and IIM Calcutta, the second edition was even bigger compared to the inaugural 2021 edition. WinZO is the only gaming company to launch such an industry academic program to promote entrepreneurship in the online gaming sector of India.

Commenting on the launch Bharath Reddy, Placement Coordinator of IIM Ahmedabad said that “We are happy to host WinZO with this type of unique engagement activity and also are delighted to see their quest to promote the value of entrepreneurship and innovation through WinZO BOSS”.

WinZO B.O.S.S season 2 involves over 1000 applicants, and there are remunerations and prizes worth INR 50 lacs up for grabs. Winners can use the scholarships to fund their higher education needs/entrepreneurship ideas.

Along with it, the top 20 participants were made to experienced the working environment at WinZO’s headquarters in Delhi to present their ideas to the leadership team and gain insights into the company’s operations.

Brahmateja Pothukanoori, Winner of B.O.S.S season 2 said “I am happy to be part of this edition of WinZO BOSS, this was one of the very first offline events that we experienced here at campus. I had a chance to interact with leaders from every domain such as Product, Technology and Marketing. I am very much fascinated by WinZO’s scale and approach to be a unit economics business which is a rare find today”.

Sanketh Mahajan from IIM Calcutta was declared runner up in this season. The top 5 finalists will be provided with Pre-Placement Offers from WinZO with INR 10 lakh each with the top three receiving an additional INR 4 lakhs and INR 3 lakhs each.

During Interactions with the finalists of WinZO B.O.S.S season 2 Saumya Singh Rathore, Co-Founder, WinZO said, “2000s was a decade for social media and 2010s for E-Commerce; 2020s is going to be the decade for culturally relevant interactive entertainment products. India today is interestingly positioned as a hotbed of Global gaming innovation owing to its power of a billion+ digital consumer market and the best in the world digital payments system backed by the UPI. Clubbed, it is an once in a lifetime opportunity to establish Bharat as a global industry leader, and such disruption can only be possible when the best minds of the country come together to build on this opportunity. BOSS is an initiative in the same direction. It is time to Make in India for the World. We at WinZO believe in creating entrepreneurs who can build products that would forever change the way we experience the world around us”.

WinZO had also launched a a $26 million game developer fund earlier in which over 1000 companies expressed interest. The fund aims to promote interactive entertainment goods with finance and a broad distribution network, including games, the gaming industry, content production, live-ops, and security.

Hailing WinZO’s efforts towards promoting the industry ecosystem, Debayan Ganguly, Placement Coordinator of IIM Calcutta said that “We are excited to host WinZO on campus with second edition of BOSS with such an engaging activity. We have a huge alumni base of our students in this organisation and even the Co-founder Paavan Nanda hails from the same campus and it has always been a privilege to host such a young startup on the campus”.

In addition to financial support and fast paced conditions for growth, WinZO attracts talent through quality of life and ownership experience for its employees. Yash Mehta, winner of B.O.S.S season 1 said that “I came across WinZO BOSS last year and won the case competition. I let go of my traditional campus offer at IIM Calcutta because I would not have got this type of exposure and ownership in any other organization”.

Maintaining a steady growth rate with a strong focus on delivering unit economics, WinZO has become the market leader in social gaming and interactive entertainment in the country today. It is the only vernacular platform that hosts 100+ skill-based games across 6+ formats and 12+ vernacular languages. With a registered userbase of over 90 million, of which around 80% hail from Bharat (Tier II-V). WinZO is directly and indirectly employing over 1 lakh individuals and looking to grow this number to 5 lakhs in the next 18 months.

By 2030, the size of the global mobile gaming market is anticipated to reach $338 billion, expanding at a CAGR of 12.3%. “We understand its intrinsic obligation and as the market leader in India to position it at the centre of this enormous opportunity by supporting the country’s gaming and interactive entertainment technology sector and fostering an innovative environment. In line with the Hon’ble  Prime Minister Shri Narenda Modi’s Make in India and Digital India objectives, WinZO seeks to promote the creation of AAA game titles and entertainment IPs of the highest calibre in India.” Soumya added.

WinZO is the largest social gaming and interactive entertainment platform in India. Launched in early 2018, the Company partners with third party developers to host games on their Android app, where users can enjoy personalized multiplayer gameplay experiences. The platform is available in 12 languages such as English, Hindi, Gujarati, Marathi, Bengali, and Bhojpuri, with over 85 million registered users. The WinZO platform facilitates over 3.5 billion micro-transactions per month across a portfolio of 100+ games. WinZO is focused on building an enthusiastic community of gamers and gaming influencers in Tier II to V cities in India. The Company envisions a future where the WinZO platform can deliver a culturally relevant and enjoyable experience in the Indian gaming ecosystem, monetized through a unique micro-transaction model.

Narvijay Yadav honoured at the International Conference on Environment

The Biggest Day for New Actors across the world, 6 Jan