Yoodlee’s next Punjabi film ‘Shinda Shinda No Papa’ to release on Baisakhi, 2023: Yoodlee Films is on the path of expanding itself in the regional cinema universe and giving audiences great movie experiences. 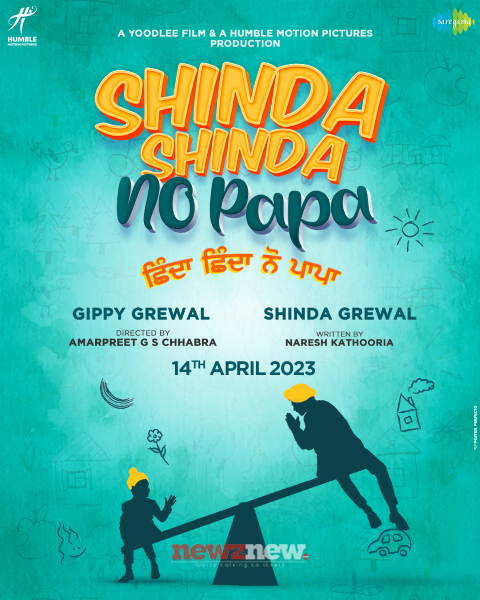 After announcing multiple movies in Punjabi and Malayalam, the film studio vertical of Saregama India Ltd. recently announced its next Punjabi project with superstar Gippy Grewal as the lead. The film, ‘Shinda Shinda No Papa’ will release on the festive day of Baisakhi on April 14, 2023.

The movie will star Gippy Grewal as the lead alongside his son Shinda Grewal. This is the first time we will see the father-son duo together on screen. The film is based in UK and moves to India revolving around a father trying to get his naughty and mischievous son on the right track.

Superstar Gippy Grewal whose son Shinda also stars in the film says, “I thrive to give complete entertainment to my audiences, and ‘Shinda Shinda No Papa’ is no exception. The film has a rollercoaster of emotions and shows how a father manages his disobedient son while moving from UK to India. I am very excited to work with my son Shinda and bring our real-life chemistry to the screen.

This is going to be my second film with director Amarpreet Chhabra and working with him is a delight. Looking forward to coming together with Yoodlee Films and giving audiences a movie to cherish on Baisakhi.”

Says Siddharth Anand Kumar, Vice President, Films, Saregama India, “Gippy has an incredible connect with the audiences and we at Yoodlee are enthralled to have him on board. Shinda, on the other hand, is a little bundle of talent and full of surprises before the camera. It would be great to see the real-life father-son duo acting out a totally unexpected equation on the screen. We hope to showcase many more gifted stars and storytellers that inhabit this industry and ‘Shinda Shinda No Papa’ is another step towards achieving that goal.”

Director Amarpreet Chhabra adds, “All of us are working very hard to ensure that ‘Shinda Shinda No Papa’ turns out to be a complete entertainer. Working with Gippy for the second time will be even more special than the first because of the father-son pairing. To have Yoodlee Films back us has also been a huge advantage as they have worked with diverse industries and have a very broad vision of entertainment.”

The film’s writer Naresh Kathooria says, “I have tried to bring a certain light-heartedness and sense of joy in the story. I am happy that the release date has been announced and now we and the audience have a date to look forward to.”

Since its inception in 2017, Yoodlee Films has produced over 18 films, breaking barriers of content and languages, with productions in Malayalam, Tamil, and Marathi, apart from Hindi. Its presence on OTT platforms is a formidable one. While its films like Hamid went on to bag two National Awards and KD won National Award for Best Child Artist, films like Axone, 200 Hallo Ho and Collar Bomb topped the OTT charts.

Hotel room rates in Auckland may go up for tourists

Charmed Season 3 – When It Is Coming On Netflix?