NewZNew (Chandigarh) : Council for Scientific and Industrial Research (CSIR), today launched BGR-34 – country’s first anti-diabetic ayurvedic drug with DPP4 inhibitory Activity. BGR-34, designed for type 2 Diabetes mellitus has been scientifically validated for its efficacy and safety. BGR-34 is developed jointly by National Botanical Research Institute (NRI) and Central Institute for Medicinal and Aromatic Plants (CIMAP), the research units of CSIR, Govt. of India situated at Lucknow. assing its larger benefits to people, BGR-34 has been economically priced at Rs. 5 per tablet as compared to latest DPP4 inhibitors globally. BGR-34 is now available on all major chemist counters of Punjab, Chandigarh and adjoining states. 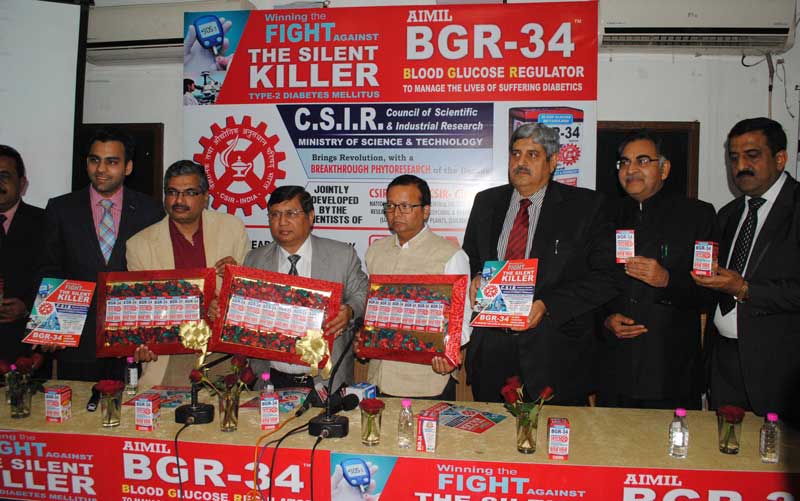 Speaking on the occasion Dr.A.K.S. Rawat, Sr. Principal Scientist, CSIR-NBRI said “6 crore of the adult Indian population has been found to be diabetic and there is no effective solution for diabetes as yet. We are sure that eminent medical professionals will recommend it to their patients suffering from type 2 Diabetes mellitus for quicker and consistent response. CSIR’s premier research institutions have developed and established the efficacy of BGR-34. The modern diabetes drugs are known for side-effects and toxicity while BGR-34 works by controlling blood sugar and limiting the harmful effects of other drugs.”

The scientists of NBRI and CIMAP, joined hands in developing an effective, safe, patient friendly solution towards management of type 2 Diabetes mellitus. They had in-depth study of over 500 renowned ancientherbs and finally identified the 6 best herbs listed in Ayurvedic ancient texts for various ailments and indications namely Daruharidra (Berberisaristata), Giloy (Tinosporacordifolia), Vijaysar (Pterocarpus marsupium), Gudmar (GymnemaSylvestre), Majeeth (Rubiacordifoila) and Methika (Trigonellafoenum-graecum) to be combined in different fractions &quantity and processed meticulously to develop a marvelous anti-diabetic formulation. The herbs were further subjected to optimization studies to establish the right proportion.

Pre-clinical studies of this antidiabetic formulation revealed significant reduction in high blood sugar level in diabetes induced experimental subjects, with the activity being comparable with the reference standard anti-diabetic allopathic drug. Besides, the drug was found to improve LFTs, KFT’s and lipid profile significantly. It also provided the much needed pronounced antioxidant protective activity. No untoward effects were observed during the course of study. Clinical studies with BGR-34 have also revealed significant anti-diabetic activities with no untoward effects observed.

For the purpose of quality commercial production and extended distribution, Aimil Pharmaceuticals (I) Ltd, the organization well known for its innovative, quality Herbal / Ayurvedic products, has been transferred the rights & technical knowhow to produce and market it for medical use. The company is manufacturing BGR-34 at its state of the art manufacturing units, which are well equipped with latest technology for manufacturing quality medicines with astringent most quality control measures.

Mr. K. K. Sharma, Managing director of AIMIL Pharmaceuticals, said “We are happy to be partner with institutes of such repute for passing on its benefits to the people. We have  decided to launch this marvellous anti-diabetic product in the brand name BGR-34, standing for Blood Glucose Regulator with 34 identified active phyto-constitutents from herbal resources. With a strong marketing distribution network spread all over the country, Aimil is strongly committed to carry forward the marvellous benefits of this novel research to the suffering masses all throughout the country and abroad.”

Aimil Pharmaceuticals, already had one successful technological collaboration with DRDO (Defence Research and Development Organization, Govt. of India) yet another premier research institute in the country, for effective and safe treatment of leukoderma, still considered to be a big challenge to address. The product for leucoderma was successfully launched in the market in the name Lukoskin, bringing smiles for the patient suffering from the social stigma, leucoderma. In appreciation to its research work and commitment to develop high quality innovative drugs, Aimil Pharmaceuticals has been bestowed with 3 national awards from Govt. of India for manufacturing herbal medicines of outstanding quality and also for research and development activities.
Also Read :   Mahakosh extends its range from oils and ventures into the Soya Chunks segment