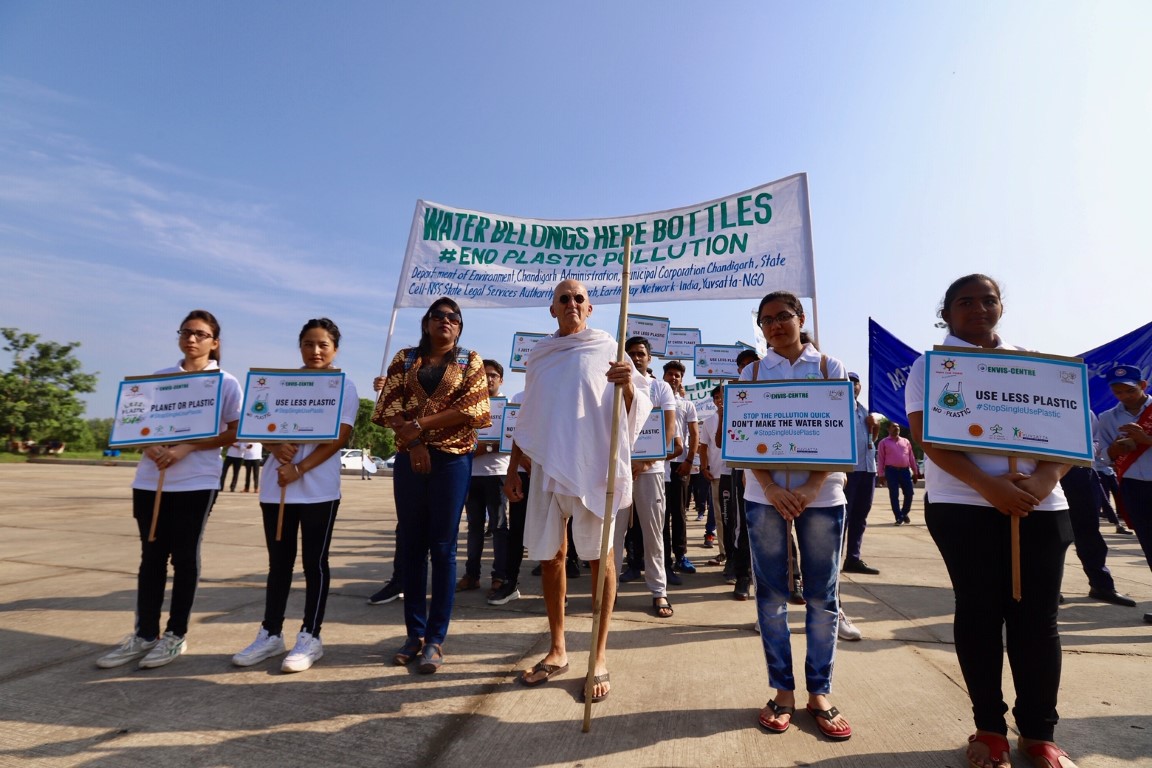 The march saw the participation of foreign and Indian delegates attending the GYPF besides 5000 students from different schools and colleges of Chandigarh and was led by the American Gandhi, Bernie Mayor.  It was flagged off by the Punjab Governor, V P Singh Badnore.

The highlight of the event was a 100 meters wall painting on the theme of “Living in Harmony with Nature” prepared by children of Carmel Convent school under the guidance of Anna Karina Jardin, a Filipino entrepreneur and visual artist championing children’s rights and capacity building.

Along with the huge wall painting, more than 100 posters were also prepared by the children and an exhibition of the wall painting and the posters was held at Sukhna Lake in the morning.

Later, at the valedictory session of the GYPF, six local peace clubs teachers were honoured for their work. There was also a   presentation by the students from the six schools and colleges on the work that is being carried out in their respective institutions.

Speaking on the occasion, Ms Harjinder Kaur said she was happy to be part of the peace festival and wished the young people luck. She hoped that after their return to the respective countries, they will keep in touch with one another and also implement the crucial learnings they had at the peace festival. She also paid tributes to Mahatma Gandhi on his 150th birth anniversary.

In his concluding remarks, the Chief Guest, Mr. Thilanga Sumathipala, who is also the chairman of Parliamentary Select Committee on SDGs in Sri Lanka said that the youth have a very critical role to play in creating awareness about the SDGs.

He also spoke about his efforts to introduce SDGs in the Sri Lankan parliament. Paying tributes to Mahatma Gandhi, he said he was happy to be in the land of the Mahatma. Both Gandhi and Buddha, were revered in Sri Lanka and it is important for us to follow their teachings and ideals, especially the Gandhian talisman of reaching the last person in the village.

Today being the 150th birth anniversary of Mahatma Gandhi, all the participants rededicated themselves to the Gandhian Talisman of leaving no one behind and to dedicate all their actions to the benefit of the last person in the village.

At the end, there was a Punjabi folk bhangra and giddha performance by artists from the North Zone Cultural centre and also by the Indian and Indonesian artists of the India-Indonesia Sangam.

The 14th GYPF saw art and thought coming together to promote Gandhian ideology and sustainable development.  A rangoli artist from Raipur, Pramod Sahu did a huge painting of Mahatma Gandhi to honour him on the occasion of his 150th birth anniversary which was a highlight of the program at the Indian School of Business.

All the three global youth icon awardees – Sameer Garg of Billionables; Dessy Andriana of Sociopreneur ID from Indonesia and Khairul Mansoor from Malaysia – joined the march and the valedictory sessions and took a special pledge to rededicate themselves to the teachings of Mahatma Gandhi, especially his talisman.

Department of Biotechnology awards TERI for innovation in methane generation from...