newznew (Chandigarh) : The most-awaited lifestyle show of the region, Thailand Week 2017 got off to a colourful start at Himachal Bhawan here today. Hundreds of residents of Tricity and surrounding areas visited the fair on the first day today. Mrs Kavita Singh, Secretary Industries, Chandigarh Administration and MD, CITCO, Chandigarh, inaugurated the fair with the ceremonial lighting of the lamp followed by ribbon cutting ceremony. Dr Tapasya Raghav, Director-cum-GM-Industries, Chandigarh Administration, graced the occasion as the Guest of Honour on the occasion. 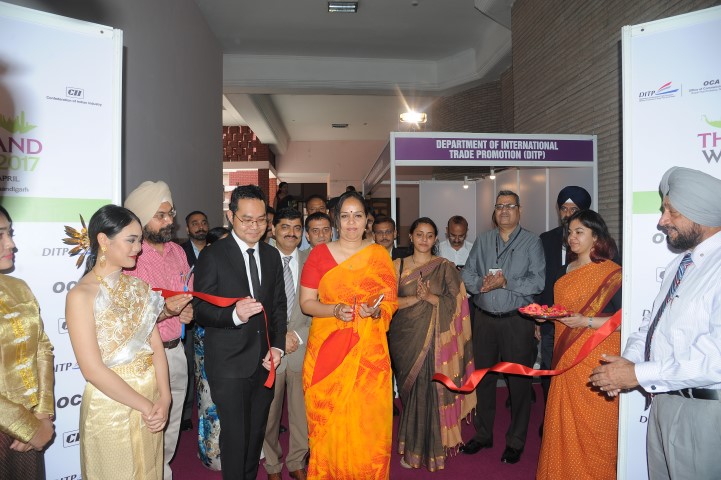 Confederation of Indian Industry (CII) in association with Office of Commercial Affairs (OCA), Royal Thai Embassy, New Delhi and Department of International Trade Promotion (DITP), Ministry of Commerce, Royal Thai Government is organising the 5th edition of Thailand Week (An Exclusive Exposition Promoting Trade, Showcasing Culture & Art of Thailand) from Wednesday, 29 March to Sunday 2 April 2017 at Himachal Bhawan, Sector 28 – B, Madhya Marg, Chandigarh.
Panuwat Jantharajit, Counsellor (Commercial), Office of Commercial Affairs, Royal  Thai Embassy said, “Our aim is to boost people-to-people contact between Thailand and the North India. With many Thai students studying at Panjab University, the City Beautiful enjoys a special cultural relationship with the people of Thailand. Direct flights from Chandigarh to Thailand slated to start soon will also boost trade as well as people-to people ties between the two nations.
Rohit Grover, Chairman, CII Chandigarh Council, welcomed 30 participants from Thailand who are displaying skin & beauty care products, wellness/spa products, gems & jewelry, optical goods, handicrafts, artificial flowers & home décor items, apparels & fashion accessories, ladies handbags, footwear, household products, food items, pet food and much more.
This exclusive 5 day exhibition would enhance trade promotion between India & Thailand and is would be a complete showcase of Thailand’s culture. The timings of the fair are from 10am to 8 pm and entry to the event would be free. Apart from good shopping spree for the citizens of the Region, this event would also focus on the Trade segment through the focused B2B meetings that would be heldtomorrow & day after (30th & 31st March) at Himachal Bhawan between 11am to 1pm. In order to encourage maximum interactions, the registration for event is not being charged.
Sofi Zahoor, Vice Chairman, CII Chandigarh Council acknowledged DITP officials for once again, choosing Chandigarh as the regular destination for Thailand Week for 5th time in a row and reminisced the CII’s long association with Thailand in Chandigarh in year 2006, when more than 100 participants joined at the then CII Chandigarh Fair at Parade Ground, Chandigarh. He requested the Embassy officials to re-consider the Thailand’s participation in 2017 not only in Chandigarh, but other Tier 2 cities like Lucknow & Jaipur as well.

“Krishan Vs Kanhaiya”- A Thought Provoking play about an Atheist Battle with God !!

Sustainable Tourism- the next big Trend