Chandigarh Chemists Association announced that it will be participating in the bandh on September 28 as part of the call given by the All India Organization of Chemists and Druggists (AIOCD), against the encouragement of government to the online pharmacies. 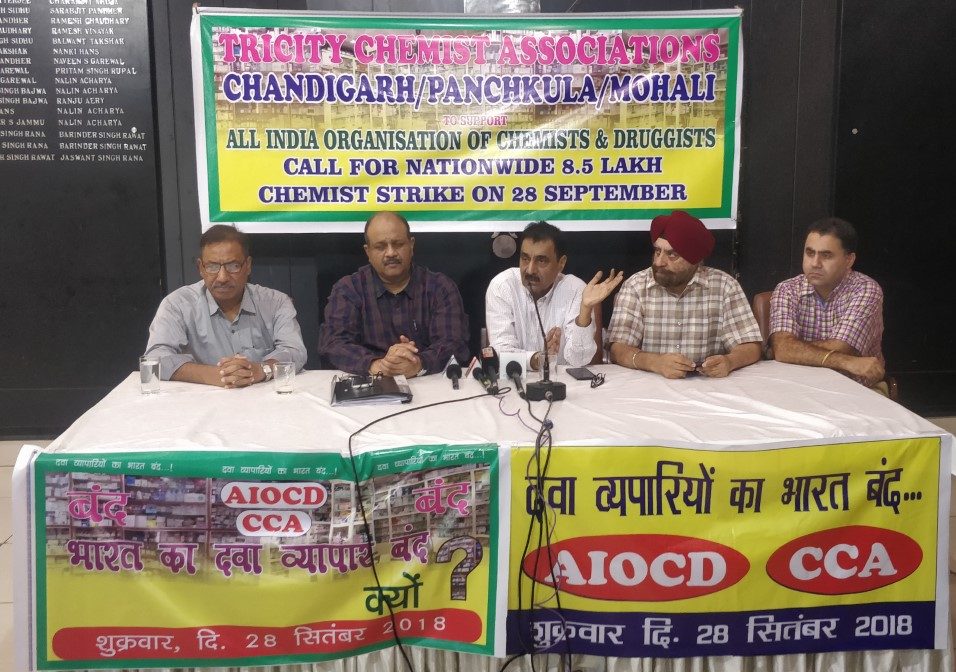 The Chandigarh Chemist Association President Mr Vijay Anand  General Secretary Vinay Jain and other members said that the online pharmacies were a threat to the public health and the business of regular pharmacists in the country, there are 8.5 lac members in our Chemists Association of all States and Union Terroritries all over India.

They expressed concern that the tech-savvy youth in the country can misuse the online pharmacies for purchasing the drugs that were banned in the country or buy medicines that require prescription against the law.

“We are observing one day strike on Friday, September 28 to protest against any move by the government allowing sale of medicines through internet or allowing e-pharmacies to operate in India in any form,” AIOCD said in a statement.

If the government does not consider our appeal positively then AIOCD shall not have any option but to go for nationwide indefinite agitation against online sale of medicine, AIOCD president JS Shinde said.

The serious, among many concerns brought out by AIOCD were not only commercial business loss of its members, but online sale of medicines if allowed, it would be hazardous to the public health at large, more importantly the tech-savvy young generation of our country may have irreparable damage,  said Vijay Anand President Chandigarh Chemist Association.

We have made repeated appeals by memorandums to the government, concern ministers, and departments, state food and drug administration citing “numerous cases of illegal online sale of medicines” by so called e-pharmacies, and portals and observed twice a one day all India chemists bandh to sensitise the seriousness of this issue, Mr Vinay jain General secretary Chandigarh Chemists Association said.

Drug prices are regulated, controlled by the government with DPCO. Total trade margin is restricted 16 per cent to retailers and 10 per cent to wholesalers. It is observed that online players offer discount up to 50 to 70 per cent openly.

The innocence and magic of Nanhi Pari’s in Baalveer on SAB...