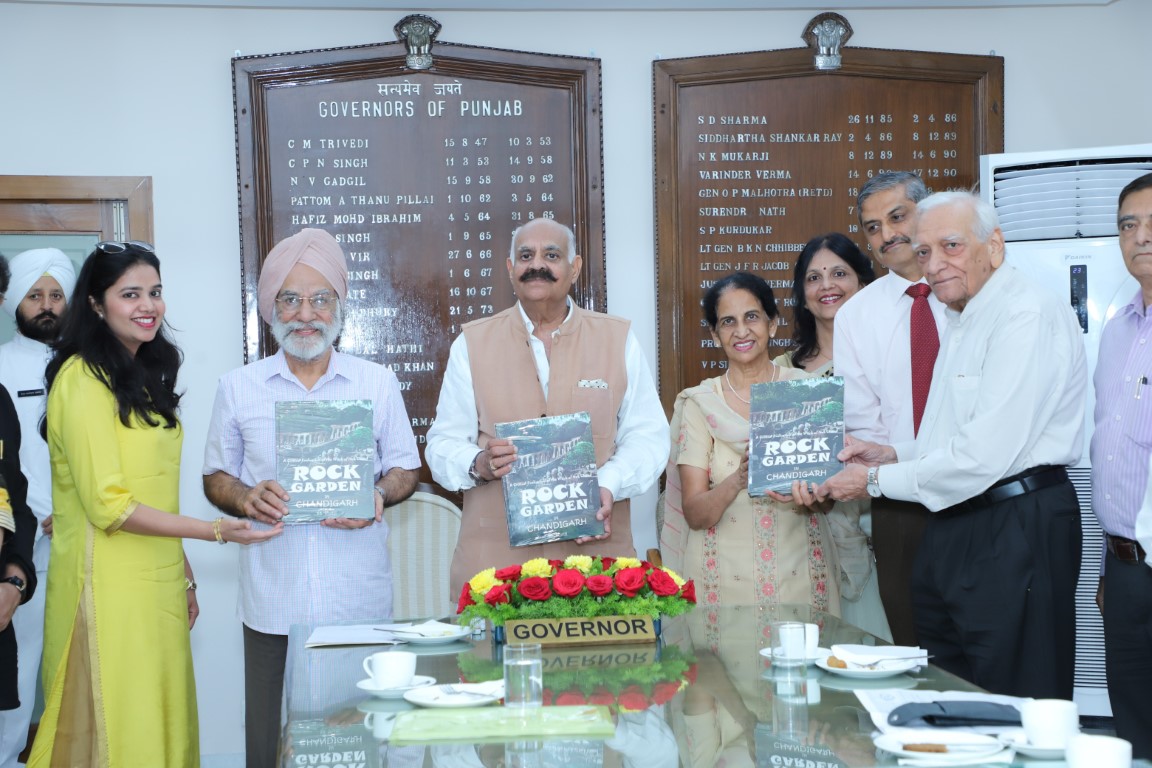 The book, published by White Falcon Publishing (https://www.self-publish.in/), is valuable one which records and analyses the work of a great, courageous and enormously energetic artist. It carries the measured drawings of the garden that he had prepared by the author over 18 months, besides an insightful illustrated analysis and critical evaluation of Nek Chand’s versatile creativity grounded in Punjab’s folk art, architecture, and construction methods.

Mr Bhatti has recorded his painstaking examination of Nek Chand’s creation, the Rock Garden in Chandigarh”. It is a definitive treatise on what is now called “Outsider Art”, so much so that articles based on it and published internationally by the distinguished scholar eventually made Chandigarh’s Rock Garden world-famous and its creator Nek Chand a global celebrity. Dr Bhatti undertook his research work on the Rock Garden way back in 1975 soon after his first visit had bowled him with a self-taught artist’s holistic vision and refreshing creativity exposure to which was a pleasant surprise for him as India’s pioneer researcher and teacher of architecture and allied disciplines.

Dr Bhatti said, “My interest in the Rock Garden as a subject of serious research surfaced when I first saw it in 1975 after having taught art and architecture at Chandigarh College of Architecture for 14 years.  What I immediately noticed was Nek Chand’s foresight, planning, strategy, and comprehensive action plan in the creation of the Rock Garden. From 1958 to 1965, as roads inspector of the Chandigarh Capital Project, he was collecting material such as souvenirs from the existing villages that were bulldozed to make way for the new city and rocks from Ghaggar Riverbed suggesting human, animal, and bird forms that he studiously deposited on the site covering the tributaries of a Barsaati Nalaah that had drained run-off rain water from the Shivalik Hills since hoary past. The site was overgrown with kikar and shisham trees and thorny bushes, and also infested with snakes, reptiles, and swarms of mosquitoes.”

He said, “Rock Garden’s intrinsic merit as an art-work of global import is not because it has been built with waste material as is popularly believed and propagated by art-blind people worldwide.  Its unique distinction lies in India’s great tradition of holism that Nek Chand had instinctively adopted in his multi-disciplinary approach to problems of significant creativity that encompasses environmental conservation, sculpture, landscape design, construction methods, planning, architecture, formal/informal design, thematic diversity, display methods, rainwater harvesting, recycling, prevention of flooding, self-help construction strategies, and a host of other items.”

Where Le Corbusier is regarded by many, including myself (one of the three examiners of the thesis), as among the greatest individual creators of the culture of this century, the lowly sole author of Chandigarh’s rival attraction was sustained only, it seems, by his energy and a motivating love for the tradition and fantasies of his own history. Great care has thus been taken by the committed and self-motivated scholar to record and annotate the Rock Garden in photography, measured drawing and specification in unprecedented comprehensiveness.

The book is written with sensitivity, and admiration the writer has for the artist Nek Chand is transmitted forcefully throughout the work. Dr Bhatti insisted that his book is a must-read for all schoolchildren, college and university students besides artists and scholars of all genres if they want to figure out how the Government of India’s farsighted programmes like “Make in India”, “Skill Development”, and “Start-ups” find timeless echo in Nek Chand’s internationally-acknowledged antecedent art-work.

About the Author: Dr SS Bhatti

Born in Amritsar on 24 June 1938, Dr SS Bhatti is Founder-Teacher, and Former Principal, Chandigarh College of Architecture. He has published over 700 articles in India and abroad on Poetry in English, Urdu, Hindi, Punjabi.  Author of 25 books on art, architecture, theology, poetry, criticism, etc. he has won over 20 awards and honours, notably, Life-Time Achievement Gold Medal in Architectural Education; National Award for Excellence in Architecture [Research Category]. National Academy of Arts, Sciences, & Literature, Italy, appointed him National Art Adviser for India. Government of India awarded him Two-Year Senior Research Fellowship for the study of historical monuments of Sikh Architecture.

8th International Day of Yoga was Celebrated by Beauty & Wellness...